I only decided I was going to this concert about 2 hours before it actually started. And I was almost late because I spent too long looking for the nonexistent lunchbox section at TJ Maxx.

Ah, the joys of adulting.

Admittedly, I didn't know a ton about Uri Caine before showing up to his concert last night. I knew was a pianist, and that he had done a jazz Mahler album that I've been meaning to listen to for years, and that was about it. I don't know why his week-long residency at Mannes didn't get more press -- the audience was maybe half full, only about 30 people. But that didn't stop the trio from taking the audience on an adventure to remember.

After sitting down at their instruments, the players began to noodle around, as is common for the first minute or two of a jazz set. But they kept noodling longer than that until eventually Perowsky began to play in something resembling a steady four-beat, seemingly on the fly. The other two adjusted their fooling around slowly, almost imperceptibly, until eventually the entire trio was synced. It was the kind of thing that leaves the audience with jaws on the ground; I know I was in total awe. 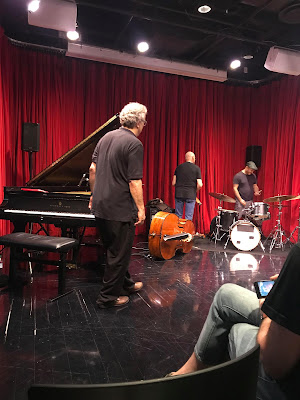 *applause* "Quick, take a photo, my phone is dead!" *band starts to pack up* "What, now?" "Yes!" *fumbling with phone*  -- an actual conversation my date and I had yesterday

The word that pops to mind when describing the trio is deft. Their entire set was full of tact and panache, and each player performed to his fullest without detracting from the others. Even at times when the music entered a "free" state similar to the opening of the set, it seemed like the players were aware of each others' improvisations -- perhaps that explains how they always found a common beat after a few seconds, even though Caine's gaze was glued to his hands and Helias never once opened his eyes.

Caine's improvised riffs very much evoked his career as a classical composer; though I didn't know he was classically trained when I saw him, there were a few moments where I turned to my date and mouthed "Debussy? Stravinsky? Messiaen?" and she smiled and nodded in corroboration. A disciple of George Crumb, Caine's claims to fame are his reworkings of classical music: not just Mahler, but Wagner, Schumann, Mozart, and even Bach's Goldberg Variations. One riff in particular from last night's concert evoked a dreaded piano solo from Stravinsky's Petrushka.

Helias's bass lines were creatively realized, if a bit stodgy. He, unlike many jazz bassists, was equally apt with a bow as pizzicato -- his bowed walking bass was refreshing. Perowsky left no timbre unexplored on his kit, from the side of the crash cymbal to the stands of his drums. His wrists alone were something to write home about; when he wanted a crash, but not too loud, he would tense his wrist completely and essentially push the cymbal down with his stick, muffling the sound just enough.

They played for an hour without stopping. The lines between actual charts and improvised filler material were blurry; that being said, the charts ranged from up-tempo rock-with-jazz-chords-sounding romps to the usual swing patterns. The final minute consisted of a series of dominant-tonic progressions -- literally V-I-V-I etc. -- but each time he played it he added more notes until he ended up with cluster-cluster-cluster-cluster. Take that, Mozart.


If you get a chance to see Uri Caine and any cohort of his, you should jump on that opportunity. His music has charisma and charm; it's nouveau-jazz without being inaccessible. And now that I've bought a lunchbox as well, my life is complete -- except for the fact that I forgot to bring it (with my lunch inside) to work today. Sigh. 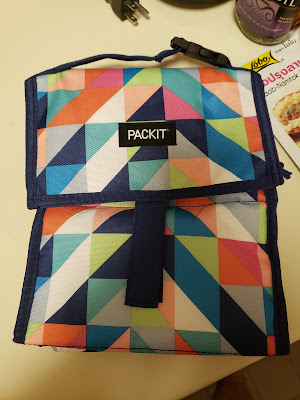 Yes, last night I chose a new music concert over the New York Phil playing Beethoven's Eroica. But I saw the Phil do Eroica last season. And at this rate, I'll probably get to see it next season. And the next season. Ad nauseum.

Besides which, this concert had the universal college-student trump card: it was free.

As New York's new music ensembles go, S.E.M. is ancient. Founded shortly after Czech composer Petr Kotík moved stateside in 1969, they were -- and are -- closely linked with the American experimentalists that make baby boomers wrinkle their noses. They now perform regularly, mostly in Brooklyn Heights's Willow Place Auditorium (best described as a cross between a parochial school auditorium and a YMCA basketball court -- one of my favorite quirky concert venues in NYC). 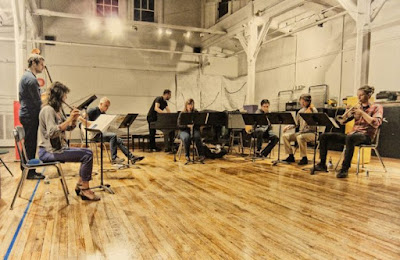 Not pictured: the gymnastics mats piled in the back left corner

The program was composed of new pieces written by students of S.E.M.'s biennial Ostrava Days festival along with older stalwarts of the ensemble's repertoire. Particularly of note was violist-and-composer-on-the-side Anna Heflin's Included/Excluded (2019), which found a string quartet sitting with their backs to one another, each playing a fiendishly difficult and independent line. Then, all of a sudden, one of the violinists shouted: "CHAIR!" 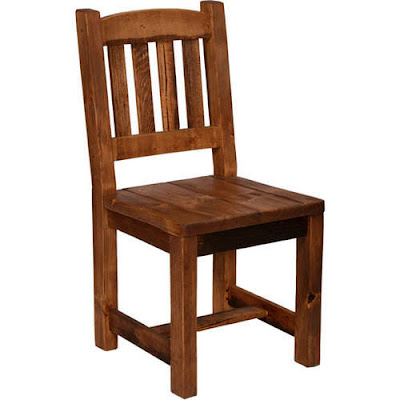 I was sort of confused -- maybe she said "share" or something like that? No, she said it again, "CHAIR!" at which point the cellist began clapping at rhythmically constant, but seemingly arbitrary intervals. A couple minutes later, the cellist launched into a tirade about how people who drop dead on the street are still expected to make polite banter with passers-by. It was absurdism at its finest; I found myself scratching my head, but oddly and thoroughly satisfied.

Other highlights included Alvin Lucier's Navigations for Strings (1991), a piece which consists primarily of ever-so-slightly compressing and widening microtones; if you listen carefully, you can hear the sound oscillations getting faster and slower with the changing dissonances. Kotík and Wolff's pairings of pieces each displayed a very distinct narrative of their compositional evolutions.

But, perhaps most amusing of all was the final piece, Earle Brown's Available Forms I (1961). The sheet music of the piece takes the form of six unbound pages, each with five "events." The events can happen in any order, the pages can be played in any order, with any number of repetitions. Kotík had constructed a nifty music stand-mounted cardboard contraption with which he could show the orchestra how to move between pages; the events were shown with the fingers of his non-baton hand.

Overall, a great start to the project. If you're in the mood for something a little weirder, S.E.M. is your group. Oh, and be sure to take a visit to the Bohemian National Hall on E 73rd St -- it's the only consulate-plus-cultural-center-plus-restaurant you'll ever visit, I assure you.
at May 29, 2019 No comments:

Preview: What I'm Looking Forward To This Summer | #1Summer50Concerts

I've spent the last few months sifting through calendars and articles in hopes of even finding 50 concerts to go to this summer. Most big cities' classical music scenes dry up in the summer as orchestras take up residency at festivals in the quaint countryside. I'm glad to say, though, that NYC's summer music scene is active as always. Here are a few things I'm looking forward to seeing this summer: