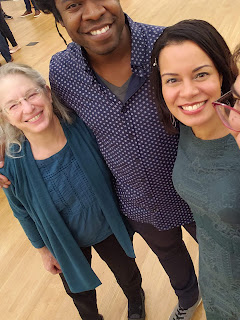 Is this selfie terrible? Yes. Does it have (most) of Dashon Burton it it? Also yes.
Also, first person to comment "Nice glasses," gets a kick in the shins.
(left to right: baroque cellist Alice Robbins; Dashon Burton; soprano Michele Kennedy; a fraction of my face)

This is going to be really quick because I'm putting off a problem set that I haven't started (eek!) which is due tomorrow (double eek!).

Remember prisoner of the state (concert 11 of 50 from this summer)? Remember how I mentioned that my job got me into a rehearsal meant for "classical music influencers"? Well, I didn't mention that it was a rehearsal where the covers were singing instead of the main cast. And Eric Owens's cover was Yale grad and Roomful of Teeth member Dashon Burton.

Frankly, I thought he was as good as Owens, if not better. I got to tell him that tonight. And now he thinks I'm an influencer because I was at that rehearsal. So what the hell, let's keep up the façade.

Anyway, tonight the nascent Kaleidoscope vocal octet (nonet, actually, because one of their members was missing) had their second performance ever. I've mentioned a few of the singers here before, most notably Enrico Lagasca, the bass over whom I fawned in concert #13's Cavalieri. Plus Grammy-winning tenor Karim Sulayman, fantastic countertenor Reginald Mobley, early soprano (and my voice teacher because I'm the luckiest person EVER) Sherezade Panthaki, the list goes on, all-star after all-star. Their mission is to celebrate diversity in the classical music world.

Kaleidoscope did a workshop-concert, so they only sang for about 20 minutes. Bach, Caroline Shaw (*sigh*), and a premiere by absent member Jonathan Woody.

But from those 20 minutes, I can safely say they're going to be big. Like, really big. Music with a mission is more powerful, more important, more relatable. And Kaleidoscope isn't just people who can sing. It's people who can articulate a noble cause through music.

They don't have any recordings -- this is only their second concert, after all -- but keep an eye (and an ear) out. This won't be the last you hear of Kaleidoscope.
at September 19, 2019 No comments: 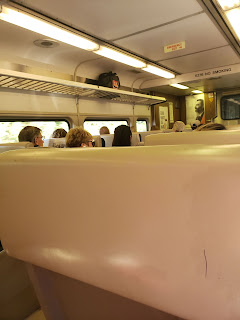 Pro: this train only makes two stops between New Haven and Grand Central
Con: they gave us one of the shitty old trains without comfy seats and electrical outlets

As I head down to NYC for a self-care day that includes a matinee at the Met and an evening concert at the NY Phil (neither of which I'm going to write about, because SELF-CARE), I figure now is as opportune a time as any to tell you about a few times when fate got in the way of my concert schedule. Sometimes, shit happens.

Thanks for sticking with me throughout this project, and stay tuned for Classical Music Geek's Concert Blitz, October 15-20 -- I'll be attending 10 concerts in those five days!
at September 16, 2019 No comments:

An approximate rendering of what an Emery award might look like -- because who doesn't
want to have my badly-photoshopped face sitting on their mantelpiece for the rest of time?

EDIT: Things got so busy that I'm just getting around to this post now. I guess it makes sense to keep with the trend of always being three weeks behind this summer?

I saw too many amazing, abnormal, and downright wacky things this summer not to do an awards post. So here goes nothing:

BEST OUTFIT (CONCERT BLACK): Conrad Tao; Davóne Tines
Pianist Conrad Tao wore a black t-shirt with black capri chinos to his performance of Messiaen's Quartet for the End of Time at Bargemusic. Baritone Davóne Tines beat the Caramoor heat by rocking a black suit with no shirt underneath.

MOST EFFECTIVE INTERMISSION COSTUME CHANGE: Vivica Genaux
Mezzo-soprano Vivica Genaux started her concert at Caramoor in a colorful dress with a four-foot train; after intermission, she returned to the stage in the brightest white pantsuit I've ever seen.

MOST OBSCURE INSTRUMENT: the douçaine
Piffaro's concert at the MET Cloisters was studded with weird baroque instruments, but the douçaine was the only one I hadn't heard of. Turns out it's like the bassoon's less useful French cousin.

CONCERT MOST SIMILAR TO AN ACID TRIP (NOT THAT I WOULD KNOW):
Chunky in Heat; The Magic Flute
Chunky in Heat literally had a talking tree who introduced himself by describing two flies having sex. I don't think that happens in real life (but correct me if I'm wrong). Barrie Kosky's Magic Flute was only marginally closer to how life actually works; the whole performance just felt like one big leg-filled hallucination.

FEWEST FUCKS GIVEN: Pierre Hantaï
I saw him outside smoking a cigarette 15 minutes before the concert. And then at intermission, when the entire audience crowded around to record him tuning the DiMenna Center's harpsichord, he just kind of rolled his eyes and continued with his business.

BIGGEST EYEROLL: George Li
After a beautiful Liszt/Schumann encore that would have made the perfect end to the concert, the audience forced George Li onstage to play La campanella, the most overused virtuoso piece alive. The audience murmured in delight. Li most certainly did not.

BEST FAMOUS PERSON ENCOUNTER: Vilde Frang
Because she was the only one I talked to. Because I'm a wimp.

BEST ONSTAGE STORY: Orrin Evans's Chia Pet (as told by Reid Anderson of The Bad Plus)
Reid Anderson's improvised bit-du-jour was about the Chia Pet that inspired Orrin Evans to write his song "Commitment." He also may or may not have been high at the time. I mean, who can blame him -- it was the second set of the night!

BEST PERFORMANCE OF A PIECE I HAD NEVER HEARD BEFORE AND DON'T CARE TO HEAR AGAIN: Teatro Nuovo playing Donizetti's Symphony in e minor
Yes, excavate obscure pieces. But for the love of god, only excavate the good ones!

MOST MEMORABLE CONCERT THAT I HAVE SINCE FORGOTTEN: NY Phil playing Corigliano's First Symphony
It was a lovely performance. But it was, like, concert #3. After the novelty had worn off. I still remember it fondly, but it was just overwritten by all the other great stuff I saw this summer.

PERFORMANCE THAT EVERYONE 65+ LOVED AND EVERYONE 65- HATED: Stonewall
There were a lot of old gays in the audience who were 200% convinced they had just seen the third coming of Christ. The younger crowd scoffed, wishing they had gone to see Der Rosenkavalier instead for their fill of soprano-soprano relationships.

BEST MOTIVATIONAL SPEECH: Vijay Iyer
"The fight...is....far. from. over. Which coincidentally is the name of our newest album!" TL;DR Fuck Donald Trump, but without saying those actual words.

BIGGEST DRAMA QUEEN: Brian Giebler
I understand the red-black double-sided sequin jacket. But you did NOT need to have a breakdown on the conductor's podium. 10/10 excellent entertainment.

BIGGEST COINCIDENCE: Cavalieri at St. Thomas
The bass section leader of the St. Thomas choir (he also played the small role of Consiglio)? Yeah, he teaches at Yale now. And I'm in his seminar. Emotions and Sacred Music in the Early Modern World. We're just niche like that.

ASSHOLE OF THE SUMMER: The Guy Who Yelled Bravo Too Early
I said it once, and I'll say it again. FUCK. YOU.

BEST AUDIENCE PARTICIPATION: Lacunae
Apparently, discussing your feelings with the other seven (7) people in the audience is in vogue now. Who knew?

CUTEST: Wadada Leo Smith's Grandkids
Wadada doesn't exactly deal in children's music, but his grandkids -- three or four of them aged between 2 and 12 -- were all sitting right in the front row. Part of his between-the-pieces intermission was talking to them exactly as a grandpa should -- "how was the drive? how was your day at school?"

BEST ONSTAGE NAP: Camille Bertault
Her band thought they had seen every crazy trick in her book. And then, for the final verse of one of her pieces, she feigned drunkenness and slowly laid down onstage. I don't think I've ever seen a drummer look more confused in my entire life.

BIGGEST SUMMER REGRET: Not Talking to Caroline Shaw
Yeah, I'm still not over it. Supposedly she got ahold of that blogpost. And then I got back to school and next thing I know I'm conducting one of her pieces with the Yale Glee Club. I don't believe in god, but someone is taunting me.

MOST WORTH THE TRIP: Davóne Tines and Dover Quartet at Caramoor
The look on Davóne Tines's face at the "ha NOPE!" moment of Dover Beach was alone worth the train ride. At the end of the concert, I would have happily sat through the whole thing again.

BEST CONCERT I SAW THIS SUMMER: Quartet for the End of Time at Bargemusic
Holy shit. That's all I could say. That's all I can say.
(Runner-up: ChamberQUEER Opening Concert)

MY FAVORITE CONCERT I SAW THIS SUMMER: ChamberQUEER Opening Concert
I have never left a concert with my heart more full than when I left ChamberQUEER. The NYC summer music scene's best-kept secret, and the thing I will miss most if I end up anywhere but NYC next summer. I'm smiling just thinking about it.
(Runner-up: Quartet for the End of Time at Bargemusic)
at September 14, 2019 1 comment: