[5] Sonnambula and Piffaro play Praetorius at The Met Cloisters | #1Summer50Concerts

WHO: Sonnambula Viol Consort and Piffaro: The Renaissance Band
WHAT: Michael Praetorius: Dances from Terpsichore
WHERE: The Met Cloisters
WHEN: June 1, 2019, 3:00pm

The Cloisters are pretty inaccessible to anyone who does not have a car. It's super easy to get there if you can drive -- there's a road that dumps you straight outside the ominous stone doors. I, however, am confined to the subway.

The Met Museum website claims that 190th Street is the best subway stop for The Cloisters, but last time I tried to go that way I got very lost in the web of paths that calls itself Fort Tryon Park -- all roads supposedly lead to The Cloisters, except I managed to find all the ones that don't? So, I tried my luck with the next station, Dyckman Street.

Google Maps said 0.2 miles. Little did I know that it's 0.2 miles on a path that basically goes straight up the side of a sheer rock face. And I still managed to get lost. Sigh. There really is no winning.

But I did manage to get there eventually, dripping with sweat (humidity plus out-of-shapeness plus oh yeah literally rock-climbing to the museum), and I got to use the one phrase that I always have dreamed of using: "I'm with the musicians." 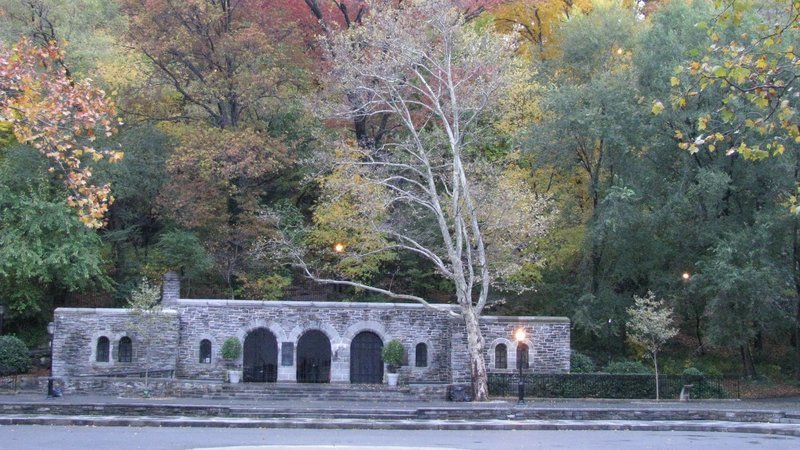 The path goes straight up the hill behind this building. No stairs. Just a 50-degree incline
and a landing that reeks eternally of weed and sad glutes.

I *may or may not* have begged a professor of mine for a ticket to this concert, in which he was playing recorder, lute, guitar, cittern and percussion (a motley array of instruments, more on that later). I have a bone to pick with the Met museums: their concerts don't offer student ticket pricing, and are often prohibitively expensive, to the tune of $70+ per ticket for the most desirable concerts. I understand that they have to turn a profit, I really do. But they have ticket sales to profit from. The New York Phil offers student tickets, and they turn a profit. What gives?

Anyway, I was offered a comp ticket on the condition that I sell CD's before and after the concert. Troubles with the Square card reader notwithstanding, I had lots of fun trying to come up with one sentence to explain what was on each CD. Sonnambula's album was relatively easy to explain: consort music by Leonora Duarte (mid 1600s Flemish) and her contemporaries. The Piffaro album, which had everything from Obrecht to Lassus to Praetorius to Bach, that was a little bit harder; I ended up settling for "everything before Bach" (conveniently, the album is called "Before Bach").

I slinked into my chair approximately 30 seconds before the show was to start; I barely had time to look at the program before the ensembles paraded onstage, bowed, and proceeded to play their first selection: a bransle (if you see a word you don't know in this post, chances are it's a French dance) for recorders, guitars, and....bagpipes?

I never thought I'd say this, but the bagpipes were nice.

The general format of the concert was grouped into different dance forms: the winds (Piffaro) would play a dance, then the strings (Sonnambula) would play a similar dance, then they'd all do it together. The contrast was always stark, but never jarring; the groups were acutely aware of each others' musical decisions and played off of each other like they had been doing it forever.

Of particular note was the set of volte that finished the concert, starting with a William Byrd arrangement from the Fitzwilliam Virginal Book as expertly interpreted by harpsichordist James Kennerly, which Sonnambula spryly repeated with gusto and joie de vivre. I had to leave (to reset the CD table) before the encore, but rest assured there was an encore, and it's currently stuck in my head even though I haven't the foggiest idea what it is.

There is no question that Sonnambula is a fabulous ensemble comprised of some of the best historically-informed string players (and one harpsichordist) in the NYC area. You will, without fail, have a lovely concert experience with them. Piffaro, though, is the real pièce de résistance of the concert. Each member of Piffaro played no fewer than four instruments, ranging from recorders of all sizes to krummhorns and dulcians and percussions and guitars and...the list goes on. Piffaro's concerts not only exhibit the highest level of musicianship -- the sackbut players played their instruments better than most of the trombone playing I've heard in my life -- but each concert is also an educational event. Co-director Bob Wiemken gives a humorous, yet thorough description of the millions of instruments that the group plays, rendering the concert appropriate for all ages. 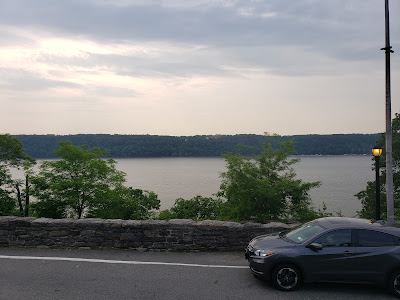 The view on the way out of the park -- I tried to take it where the car was out
of the frame but....just kidding, I didn't even try to get the car out because I am LAZY

As I left, I decided I would try my hand at getting back to the 190th Street A train stop. I was treated to the most gorgeous view -- I think Fort Tryon Park may be the most beautiful spot in Manhattan. And what's more, I didn't even get lost. Are you proud of me?
at June 02, 2019