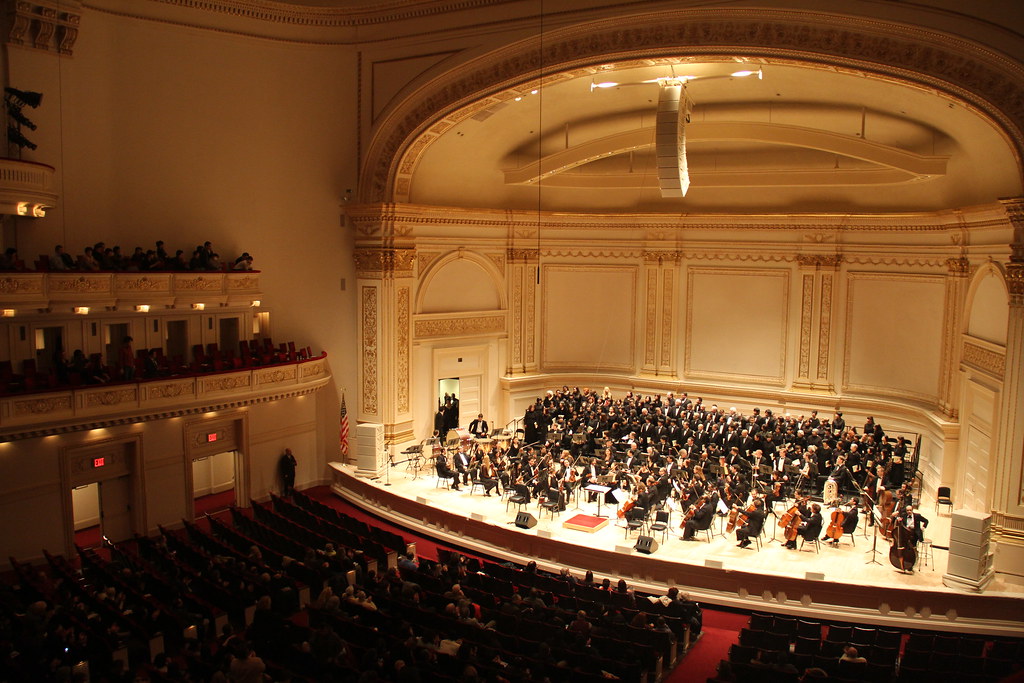 This past March, I was lucky enough to go see Richard Wagner's Die Walküre at the Metropolitan Opera. For those of you who don't know, Wagner operas are often all-day affairs, especially at the Met where intermissions are 30 minutes long. The show started at noon; I eventually walked out of the opera house at 5:10pm. The first thing that ran through my head after five hours of watching ladies in breastplates and horns howl their hearts out (yes, really):

"Gee, I want to go see another opera tonight!"

The fact that I had to be awake and singing in New Haven (about a 2hr train ride) at 9am the next day notwithstanding, I bought my standing room ticket for the 8:30pm showing of Mozart's La clemenza di Tito, hiked to the top of the Metropolitan Opera House (what is it with me and concerts that require climbing?) and stood at the top for the full two hours. And I loved every second of it.

Yeah, you could say I'm obsessed. Or you could say that I'm a passionate young adult who is invigorated by the intellectual stimulation that opera lends its listeners.

You know, I just read over that again. Let's just go with obsessed.

The most reliable part of the Metropolitan Opera is the orchestra. No matter if it's Mozart or Bartók, the MET orchestra always has their act together, whether they're in hour six of a Wagner or are playing the second show in a double-header.

Unlike most other American opera houses, the MET ends their season early (their last production was in the first week of May or so) because the MET orchestra gives a three-concert series to finish Carnegie Hall's year. Usually, at least one of the concerts has something to do with opera -- usually, they'll invite a couple of MET regulars to sing with the orchestra.

For this concert, the soloist was soprano Isabel Leonard, coming hot off of her recent smash success in Poulenc's Dialogues of the Carmelites (think French Revolution, but also nuns, and then everyone dies). I had the opportunity to see her as Mélisande in Debussy's Pelléas et Mélisande (think love affair, and then everyone dies) earlier this year, and my opinion was pretty ambivalent -- her performance was perfectly fine, but was overshadowed by the sub-par performance of tenor Paul Appleby as Pelléas and the stellar performance of baritone Kyle Ketelsen as Golaud.

I think she must have been having a bad night at that performance, because she knocked this one out of the park. Her voice floated easily above the orchestra -- not quite unmoored, but certainly well-lodged in the fantasy realm that French music craves. Gossamer, never heavy, and simply sublime, even in a highly technical passage like at the end of the Dutilleux. The start of her Ravel was also tremendous -- strong, but also supple and soft.

The orchestra's La mer was admittedly mediocre -- it felt like none of the players were taking the responsibility to make the music that Yannick was so expressively conducting. It almost seemed that the orchestra didn't know how to be in the limelight, a common ailment with opera orchestras, though not one that usually plagues the MET.

Luckily, that was just a fluke. Behind Leonard, they were able to spend the next two pieces recalibrating, and their Daphnis and Chloe was absolutely stunning. Special recognition to principal flautist Chelsea Knox, whose solos in both Ravel pieces were about as close to perfect as one can get. Also, she was like 23 when she won the principal spot with the MET orchestra. Feel inadequate yet?

If you haven't been to the MET, go. Standing room tickets are $20, and other tickets occasionally start at $35. And while you're there, I have a game that I like to play, developed with one of my best friends from school. The hoity-toity people at the MET like to spectate the in-house restaurant, which serves one course at each intermission. Stand one or two levels up on the terraces that overlook the restaurant, then try to come up with a backstory for each person. There are only so many business-people you can go through before you decide which of the necktie-wearing old people in the restaurant is the next Walter White.
at June 07, 2019