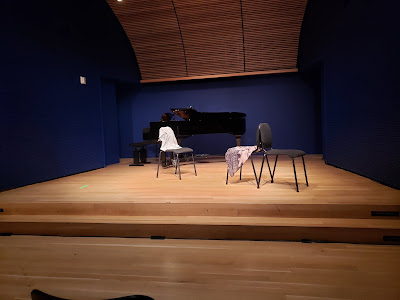 It specifically reminded me of one of those neon candy orange slices -- does that make me a terrible person?

I am an opera nut. We have established this before.

You'd think I would have at least heard of a place called the National Opera Center. Where the organization OPERA AMERICA is based. But I hadn't. My date made fun of me for that one -- rightfully so.

Anyway, the NOC is on the sixth or seventh floor of your average Gramercy office building, above a couple bodegas and a payroll services shop. It looks like a pretty average office lobby until you step into the concert hall. I mean, no office space has a concert hall, but this is probably the weirdest venue I've been in so far. Imagine if you took an orange slice and modeled a concert hall after it -- sort of like if you sliced a cylinder and then sliced those slices in half lengthwise, and then put in a wood paneled floor and a stage and painted the walls blue. Weird.

But my date sent me the Facebook event attached to a message that said, "We're going to this." So it's not like I had much of a choice.

I suppose I should be glad that my friends know to forward me any and all concerts. But hey, I'm an ingrate. That's why I'm going into music criticism.

So, I'm terribly illiterate, and I had only heard the name Camille Claudel once or twice. From what I gathered from the program notes, the performance, and S2E1 of Marvelous Mrs. Maisel, she was a sculptor who had an affair with Auguste Rodin and was subsequently committed to an asylum on dubious suspicions that she was mentally ill. That kind of story arc makes for a perfect song cycle, I will concede.

I think her primary instrument is theremin -- what a legend

The program started with three composers that would have been ringing in Claudel's ears: Germaine Tailleferre, Lili Boulanger, and finally a prelude of her dear friend Claude Debussy. Warshaw's performance was sound indeed -- it was almost invocative of jazz in the way that the individual lines were phrased in relation to one another. The product was an interesting interpretation that traded absolute readings of dynamics in favor of a sense of relativity, which was, in my opinion, a novel and refreshing.

And then, as the Debussy ended, soprano Nancy Allen Lundy, as the disheveled Claudel, slowly and trepidly walked down the center aisle of the audience. Onstage were a couple of chairs and a shawl; director Beth Greenberg made the most of a sparse staging.

The music itself was tremendous -- imagine all of the rhythmic uncertainty of Schoenberg or Webern, but with a color palette similar to that of Debussy and ilk. Warshaw played beautifully, not just because it was her piece; she clearly had a stylistic goal in mind, and she executed it beautifully. One would have thought the music emerged straight from a table at Les Deux Magots or another Parisian intellectual haunt.

Lundy's performance had its ups and downs. Her climactic high notes were right on target, impassioned and drenched in a thick coating of manic sorrow. Most of her tessitura, though, was underwhelming; her tone was breathy, and her diction was barely there. One of the movements had a refrain that repeated the word "chisel", which invariably came out as "shizzle" or "jizzle."

Because of the diction issues and the lack of subtitles, I don't think I got as much out of this premiere as I could have. The piece was obviously very well thought-out, and I'd like to see it performed again once it's had the opportunity to go through some stages of performance workshopping -- hopefully, the performers will tour it and give it the chance it really deserves.
at June 23, 2019