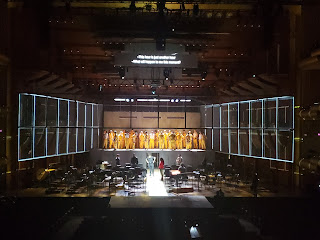 I'm not going to lie, prisoner of the state was gritty, gritty, gritty. Like, I just sat here for half an hour trying to think of an opening joke for this post. And I couldn't think of one. Because there was not a single uplifting moment in this 70-minute opera.

The stage of David Geffen was surrounded by a chain-link fence laced with barbed wire. The orchestra players wore all-black with optional black skull caps (the horn section looked particularly good in their matching hats). In the front was a faux-stone stage (with two trap doors, only clearly visible from directly above, which of course I was because I got seats on the side of the stage in the third tier because I am CHEAP), and in back, behind the fence from most vantage points, was a cell-block-looking stage that was unequivocally too small for the forty-some men of the choir.

The chorus processed out in yellow jumpsuits, wrist chains, and possibly the most convincing dirt-makeup I've ever seen. Granted, a couple of them still had perfectly coiffed hair that didn't exactly shout "prison," but the aesthetic was there.

David Lang's music exists in a strange quantum state (to the extent I understand what that means -- physicists, comment below and let me know if I'm an idiot). The way his music sounds and feels, one thinks it's simultaneously racing forward and dawdling. Many of the orchestral figures were frantic and exceedingly precise; yet, there was so much repetition that forward motion was quasi-nonexistent.

prisoner of the state was Lang's take on Beethoven's Fidelio, a convoluted plot that, without any subplots, essentially concerns itself with a political prisoner (Fidelio), who is to be killed by gradual starvation, and his devoted wife, who dresses as a guard to sneak her way into the prison and reveal the twisted reasons for her husbands unfair detainment. It's a happy ending: Fidelio is freed, his opponent is detained, joy, triumph, yay!

Lang essentially strips the two-hour-plus Fidelio of all its subplots, casting a modern light on the main story line. The characters are all deranged in one way or another, and each gets an aria to explain his or her affliction. The dehumanized "assistant" (the character of the wife) sings of how she once was a woman, but is no longer; the power-hungry "governor" sings of his obsession with fear over love; the sadistic guard sings of his willingness to do anything for wealth; the prisoner (congruent to Beethoven's Fidelio) sings of the solitary confinement that has driven him to the brink of extinction. 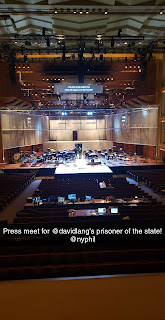 Thing I did not mention: my job got me into a press rehearsal a couple days before the
actual performance. It was us and a bunch of classical music "influencers" -- I didn't know those existed

French soprano Julie Mathevet, who played the assistant, was perfect in her character. Mathevet portrayed not an ounce of emotion until the (seemingly uplifting) end, very clearly on purpose. The governor, played by British tenor Alan Oke (who really really channeled the Patrick-Stewart-circa-Macbeth look for this role), almost struck like a Herod-type character: obsessive, whiny, and opinionated. MET regular Eric Owens (the guard) struck a perfect balance between capitulating and strong-willed. But the prize for most convincing goes to Jarrett Ott, the prisoner of the state himself (oh, THAT'S why they called it that!), whose bloody makeup and languid appearance did not compromise his operatic presence one bit.

The Concert Chorale sounded tremendous -- they beefed up their ranks significantly for this one. On the roster were are few names I recognized from spectating around the NYC and New Haven concert scenes. And holy crap, did they have tenors. High Bb's for days. Even with the choreography, which mostly included stomping and walking, the music was forceful, stark, and effective.

Lang has a knack for social commentary. I was fortunate enough to sing a piece of his earlier this year which sets the pre-sentencing speech of Eugene Debs, who was convicted under the Sedition Act for his anti-WWI speeches. To quote Lang himself: "I was mad, so I wrote this." And that seemed to be more or less the case for prisoner as well -- except in this case he had control over his own libretto. At what would be an otherwise happy ending, Lang throws in the caveat that technically we *are* still prisoners in the world, and that the only difference in a real prison is that you can see the chains. Nice.

All else aside, this was a tremendous performance. And even if you didn't get to see it, I'm certain it's going to come back. This is the kind of thing that was far too much work to truly only last for one weekend. My guess is that this production will make its way around the major symphony orchestras and opera houses and eventually get recorded. Good thing, too; it's catchy as hell and it's going to be stuck in my head until I can get my hands on a recording.

I hummed this at a concert two days later, and a lady who was sitting in front of me
turned around and said, "Is that prisoner of the state?" I think I've found my people <3
at June 10, 2019