[17] confluss + Spark Duo at Saint John's in the Village | #1Summer50Concerts 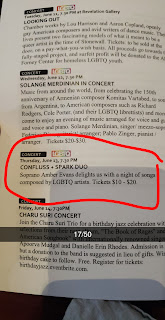 WHO: confluss (Amber Evans, soprano & Samuel Zagnit, bass) and Spark Duo (Kate Amrine, trumpet & Ford Fourqurean, clarinet)
WHAT: a concert in honor of Pride Month
WHERE: Saint John's in the Village
WHEN: June 13, 2019 at 7:30pm

I think I said it once in passing, but I'll say it again, louder this time:

I love love LOVE being a classical music geek in NYC during pride time. When you go to other cities, their "pride month concerts" center around the composers who lived in a time when being LGBTQ+ was taboo. A lot of Tchaikovsky, a lot of Poulenc, some Britten if you're lucky. Gotta keep those tickets sales high with the *older demographic*.

Thank god NYC has a burgeoning new music scene, because I think I'd die if I only heard Tchaikovsky throughout the entire month of June.

The classical music pride celebration hasn't been spearheaded by any of the larger ensembles in NYC -- their social media accounts show their support, but something about a program of Mahler and Bruckner doesn't scream queer (*ahem* MET ORCHESTRA). So, it's up to the smaller venues to program for the special season.

Saint John's in the Village has a whole series of LGBTQ+ themed concerts, from a 1920s portrait of "Le gai Paris" to lecture-concerts on the role of gay culture in worldwide popular music. This concert featured exclusively works by LGBTQ+ composers, many of which were commissioned by the two ensembles.

The program ran the gamut from (relatively) traditional to (totally) experimental, and some pieces fell off that spectrum entirely. Those included a piece inspired by punk rock legend Kathleen Hanna; a piece, performed by both confluss and Spark, in which the instrumentalists would shout random letters, each of which was associated with an instrumental sound (a musical interpretation of synesthesia, according to the composer); and a series of Sonic Meditations by the late Pauline Oliveros (one of which was interactive -- what is it with me and inadvertently walking into audience participation situations???).

The highlights of the program were far and away the compositions by confluss bassist Sam Zagnit. His diverse background shone brightly throughout, especially in excerpts of his long-form song-cycle-quintet catalogues, whose soprano part contains a theatrical breakdown that could be excerpted straight from a 1960s sitcom (or Marvelous Mrs. Maisel, pick your poison). Soprano Amber Evans proved she is as much actress as singer, which is saying something considering she's one hell of a singer. Zagnit seemed precisely in his element as an aesthetically stoic, but musically expressive foil to the hilarity that ensued from the singer's side.

Spark Duo's program was more subtle than that full-blown episode, though no less interesting. Each player had a solo -- clarinetist Ford Fourqurean played a piece entitled Rhapsody and Groove, which he described as "rhapsodic...then groovy," which seemed rather reductive at first but turned out to be the only apt description for the piece. Trumpeter Kate Amrine's solo made more of a statement in the form of a piece for trumpet and video reel entitled Thoughts and Prayers, which interspersed music with both live and recorded calls to action in the wake of gun violence. Rounding out their half of the program was another Zagnit premiere, this time in a more postmodern vein, but equally enjoyable.

If you're not sniffing out these tiny little new music concerts in NYC, then you're doing it wrong. People often moan and groan about how classical music is dying. Wake up and smell the roses: if you want classical music to live on and gain back some of that precious pre-WWII cultural relevance, stop complaining and start supporting the innovators of the future.
at June 20, 2019