WHO: Experiments in Opera and Contemporaneous
WHAT: Chunky in Heat
WHERE: The Flea Theater
WHEN: June 1, 2019, 7:00pm

I had no idea what to expect when I showed up to The Flea, a venue for experimental theater, for Experiments in Opera's production of Chunky in Heat on Saturday evening. I don't really fancy myself a consumer of experimental theater, apart from opera; I found out that I very much fit the *opera* aesthetic. Whereas the theater nuts were dressed in felt hats and billowy cotton pants, I was there in a t-shirt, jeans, and cardigan. Too casual was perhaps not the issue so much as the wrong kind of casual.

At the door, I was greeted by a worker in a pride pin (it was June 1 after all -- HAPPY PRIDE MONTH!!!!) who asked me which performance I was there to see: Chunky, or two other performances whose names I don't recall but sounded just as strange. I got my ticket, mounted the stairs, and plopped down in an empty chair in a pretty sizeable black box theater. The stage was a simple house with an astroturf lawn, two lawn chairs, and a side table containing a can of TaB cola (throwback much?),  a cup of drinking straws, and a tube of sunblock. An inflatable smiling sun graced the background; a tree with a camera attached stood off to the side, by the rightmost edge of the audience. 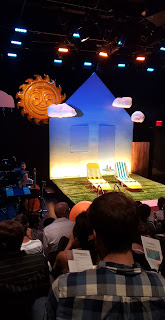 The set, featuring one creepy-ass sun

Chunky in Heat started off like any other modernist opera. The orchestra built pulsing chords from the bottom up, not unlike the opening of John Adams's Death of Klinghoffer. Chunky (a nickname for Cynthia ) is onstage at her house (supposedly in Los Angeles -- hence "in heat"), agonizing over being a little bit...erm...chunky, as well as expressing her lust for the archetypal "boy next door" ("Walter, like a tall drink of water"). It could have continued relatively normally.

But then the tree started talking -- actually, not just talking, but describing in great detail two passing fruitflies engaging in coitus. And that's when I knew I was in for a ride and a half.

Suddenly, the stage turned devil-red; the orchestra's drummer began to play a generic dance-pop backbeat; on came Chunky's mother and father, dancing some faux-conga-line type thing. It was a riot.

Those sudden changes of scene occurred often throughout the 90-minute piece. A collaboration among six composers, Chunky in Heat appeared to lack a singular musical style, but it was presented in a way that made that decision with purpose and intention. It was definitely a pastiche, but it was a pastiche determined to be so rather than one that was so out of convenience.

The orchestra was Contemporaneous, one of NYC's foremost new music ensembles, led by co-founder Dan Bloom. They played exactly how you want an opera orchestra to play: tastefully, accurately, and supportively. This was right up their alley -- whereas Bang on a Can developed a signature aesthetic long ago, Contemporaneous is still up for anything and everything. I would go so far as to call them New York's most open-minded ensemble: everything, no matter how strange, is an experiment.

The singers were all excellent. Soprano Sarah Daniels (Chunky) kept a youthful levity throughout the opera, her voice reflecting her character's girlishness rather than becoming weighted with teenage angst. Emily Geller's (Mother) lower range was impressively forceful, penetrating easily over a fortissimo orchestra. Timothy Stoddard's (Walter/Fiancé/Beekeeper) high A's and Bb's were few and far between, but when they were written, they were delivered with full tone and gusto. Joshua Jeremiah's (Father) rich baritone and Abigail Doehring's whimsy mezzo (and impressive method acting as a coyote -- LA things only, amirite?) rounded out a strong cast.

If you're not a fan of non-traditional, this is not for you. But Experiments in Opera is obviously a noble cause, and truly unique. Few other cities have "opera collectives" at such a high level of professionalism, even though new opera is just as important as -- if not more important than -- old opera. If Einstein on the Beach left you craving more, or you just want to know what's happening *now*, give experimental opera a try.
at June 04, 2019