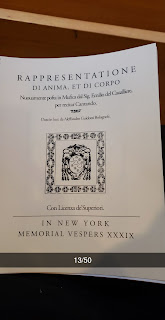 WHO: Choir and Period Orchestra of Saint Peter's

My religion of choice is music.

I know it's a little weird to think of music as a religion, but in my mind it makes perfect sense. I love music unconditionally. Music is often my first thought when I wake up in the morning, and my last thought when I go to sleep. I follow music to great lengths, even when it wrongs me and almost leaves me stranded in Riverdale after a concert because did you know NYC express buses cost $6.25 a pop?

Anyway, where was I? Ah yes, religion.

My preferred place of worship for the Church of the Holy Harmonies™ is, naturally, the concert hall. But, sometimes I find myself engaging in religious crossover, so to speak. And that's how I found myself at Saint Peter's for their annual Memorial Vespers service.

What is a memorial vespers? I didn't really know then, and quite frankly I don't really know now. Here's what I do know: I walked into the sanctuary at 4:02pm, after I stupidly chose to climb the stairs at the 53rd/Lex E train station instead of taking the escalator, and we immediately launched into a hymn -- not the Cavalieri itself, mind you, but the thing that was like "okay God, it's Cavalieri time" I guess? At least, that's my agnostic view of it.

No one really performs this Cavalieri, but it has a crucial role in music history as the "first" of so many things: first opera, first sacred opera, first explanation of figured bass notation, the list goes on and on, as I found out by reading the 30 pages of program notes at the back of the 60-page church bulletin.

For what this performance was, I was absolutely blown away. Often, church choirs do a great job of contributing to the worship service, but don't really satisfy beyond that. Cantor Bálint Karosi, a doctoral candidate in composition at Yale, must be a miracle worker, because the mostly-amateur choir sounded fabulous -- prepared, confident, and like they were having the time of their lives. 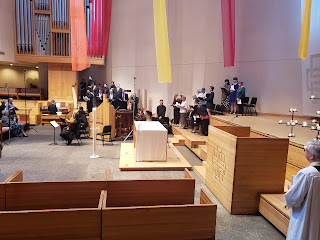 I'm not really sure what this space is supposed to be -- it's vaguely octagonal at the top, but then
pares down to...a diamond? A square? I don't know, it kinda looks like a sci-fi escape pod.

The professional section leaders from the choir sang most of the solos, but they hired out for a few extra singers to round out the cast. Baritone Anicet Castel (Corpo) and soprano Nola Richardson (Anima) sang and bickered convincingly as the dueling desires of the soul and the body; soaring tenor Elliot Encarnación (Intelletto) set the scene perfectly as an omniscient, intellectual character. The smaller parts of virtues and concepts were all well-sung by members of the choir.

But the highlight came in the form of Filipino-American tenor Enrico Lagasca. I briefly heard Lagasca sing earlier this year in TENET and The Sebastians' performance of Bach's St. Matthew Passion. He only had a couple small parts in addition to his role in the choir, but when he sang those three or four lines (he was, like, third Nazarene or Pilate after he's eaten but before he's crucified Jesus or something like that), my eyes widened, my ears perked up, and I whispered a big fat "holy SH*T" to the friend sitting next to me. Lagasca, despite his small role in this Cavalieri, gave a performance to remember, his rich bass commanding the attention of the audience without a second thought. He's still pretty young -- I truly can't wait until he (inevitably) makes it big and we can go see him as the headliner on concerts.

The orchestra was mostly area freelancers; they sounded extremely well-polished under Karosi, who conducted from the harpsichord. The continuo team, despite being distributed all over the stage, played like a well-oiled machine, and the Italian wind- and viol-consorts provided impressive variety in color. Violinist Isabelle Seula Lee opened the work with an impressive solo from the top of the choir risers, as if an angel coming down from heaven (at least that's what I assume it's supposed to represent? don't quote me on that).

Overall, big fat yes to this concert. Saint Peter's is programming music that other people don't program, and it's not only expanding the minds of church-goers, but appealing to the musical community as well. Keep on the lookout for their season next year -- I'm expecting great things.
at June 14, 2019