Welcome to Classical Music Geek's Big Gay Classical Weekend! I saw three concerts last weekend, and only realized after the fact that all of them were queer-themed. And besides which, I'm not going to get to use the hashtag #MyBigGayClassicalWeekend again until they invent time travel to ancient Rome -- as the Romans say, carpe diem.

My lovely date for this concert turned up sick, and I was having some reservations about hiking all the way out to Park Slope to go to a concert alone. Usually, I'm totally fine with going to concerts alone -- it's almost meditative, I find -- but this concert was attached to a mixer and mixing is awkward. Have I mentioned that I'm awkward?

But then my dad made a good point: at a queer-themed chamber music concert, there was practically a 100% chance that I would run into someone I know. Fair enough. I decided to go.

Lo and behold, as soon as I mounted the stairs I ran into someone with whom I went to music camp in 2010 -- we hadn't seen each other since 2013 or so. Absolutely crazy. 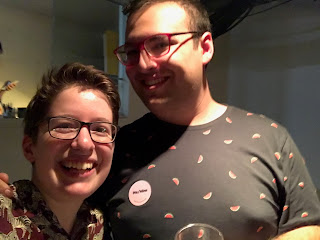 The only thing we could think to do after not seeing each other for more
than six years was to take a selfie. Have I mentioned I'm awkward?

And then two minutes later, I heard a familiar voice behind me. Not in the friend's-voice kind of way -- a famous voice. I turn around to queer icon, composer, and youngest-woman-to-ever-win-a-Pulitzer Caroline Shaw, grabbing a drink and chatting with the bartender. Turns out, she was best friends with everyone there.

I did my best to play it cool, even though I really REALLY wanted to accost Caroline Shaw and pathetically fangirl like a 12-year-old-girl meeting One Direction for the first time (dated reference? I don't know, I haven't been up to date on pop culture since my grade's bar mitzvah era). In the end, I chickened out of talking to her at all, even though I had an easy conversation starter because we went to the same music camp when we were younger (about 10 years apart of course) -- Caroline, if you're reading this, the last line of your bio gets me every time. <3 <3 Kinhaven forever

So at this point, I'm just standing there like a bump on a log -- it's not like I KNEW anyone (I didn't officially reunite with my music camp friend until intermission). I must have looked panicked or something, because one of the organizers, soprano Danielle Buonaiuto stormed past, on their way to the drinks table, and then they stopped. In their tracks. And turned around. And started a conversation with me as if they dealt with awkward 20-somethings all day, every day.

Have I mentioned I'm awkward?

Already giddy at Danielle's random act of kindness, I went into the concert room and geared up for what turned out to be one of the best nights of music I've seen this summer.

The program consisted of an eclectic mix of "whatever we feel like." New music, old music, big music, small music, it was just all, in some way or another, LGBTQ+ related. And everything on the concert was tremendous -- so much so that, instead of the highlight reel I usually give right about now, I'm just going to run through a bit of everything.

Cellist and ChamberQUEER founder Andrew Yee's recompositions featured prominently on the program. First was a quilted pastiche of Caroline Shaw's greatest hits (coupled with quilted clips of people talking about their quilting habits -- get it?), followed later in the program by a couple of Schubert songs that Yee had arranged. Originally for four cellos, the songs were performed here by the ChamberQUEER founders in quartet (Buonaiuto, Yee, baritone Brian Mummert, and cellist Julia Biber). The arrangements perfectly preserved Schubert's harmonic framework while adding a quasi-madrigalistic intimacy that the customary voice-and-piano orchestration could never hope to parallel.

Alongside the recompositions stood a couple of more recent compositions. inti figgis-vizueta's charged string quartet love reacts only was impressive, but violist-composer-educator Jessica Meyer's song cycle Space, in Chains, written for viola and soprano after poetry by Laura Kasischke, stole the show. As Meyer so eloquently put it, "It's so nice to have this song cycle owned by someone. And Danielle [Buonaiuto] owns it." Buonaiuto's expert tone-coloring aided her comfortable acting to lend drama to even the most sparse moments of the piece; Meyer's writing explored every possible timbre that the duo could produce (it read a bit like the Holst violin-soprano songs, but on steroids). Oh, and she played her part beautifully as well.

And then for the odds and ends -- turns out most historians agree that Arcangelo Corelli was *probably* a closeted homosexual, so they threw one of his trio sonatas on the program. Handel and Haydn Society concertmaster and all-around badass Aisslinn Nosky played the first part (more on her in a week or so), joined by International Contemporary Ensemble member Jen Curtis, harpsichordist Kevin Devine, and Biber playing baroque cello. The interpretation was witty and whimsy, full of spontaneity and those little smirks that chamber musicians make to each other onstage. And then, Nosky, Curtis, Meyer, Yee, and Biber teamed up for British suffragette Ethel Smyth's string quintet. The piece was lovely, but more memorable was the tangible electricity that was running through the room. The energy was contagious.

At this point, I'd been wearing the same shit-eating grin for the entire concert. My face muscles started to seize up, but I couldn't stop smiling. Oh well, at least it was for a good cause.

And, naturally, what better way to end a pride concert than with a Pauline Oliveros audience-participatory piece? It's really been a trend this summer -- either this is part of NYC new music culture, or I'm just really lucky.

With any luck, the ChamberQUEER organizers and performers will be reading this -- I want to personally thank them for creating such an open and hospitable musical environment. I encourage each and every one of you to attend ChamberQUEER's community events during the year, and (hopefully!) their second season next summer.

And, just so that this post will show up next time she googles herself (we all do it, don't lie), I just wanted to say her name one more time: Caroline Shaw.
at June 30, 2019