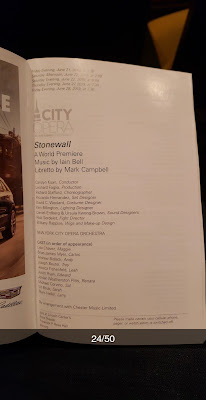 WHO: New York City Opera
WHAT: Stonewall, music by Iain Bell, libretto by Mark Campbell
WHERE: Rose Theater @ Jazz at Lincoln Center
WHEN: June 22, 2019 at 2:00pm

I am so glad that the NY City Opera decided that this project needed to be a part of their season. It's almost like they picked up the slack for all of the organizations whose seasons had already ended. And, from what I gather, this wasn't a Stonewall50 one-off -- I think the City Opera has a pride concert every year (at least there was one last year and there will be one next year).

I went into Stonewall with high hopes, and in some ways, those hopes were wholly fulfilled. The cast was, for the most part, absolutely stellar in both acting and singing. Marc Heller's police chief in particular stood out from the rest, his shrill, yet full Puccini tenor piercing above the percussive mumblings of the police force. As recently-fired teacher Carlos, Brian James Meyer's Spanish rolled off the tongue just as easily as his English, all encased in a sweet, yet fiery baritone. Lisa Chavez was perfectly cast as butch-in-charge Maggie; her agile mezzo seemed incongruous at times, but it was eminently clear that was on purpose.

On the whole, the production, while minimalistic, was stunning. Colored LED lights were hung on the perimeter of the set wall seemingly willy-nilly, both setting the mood and casting an ominous glow on the characters themselves. A few upstage benches created a leveling system that made the chaos that ensued a bit more organized. Choreographer Leonard Foglia executed a complicated vision with military accuracy, both in the dance breaks and the chaos that ensued. The orchestra, conducted by Hartford Symphony music director Carolyn Kuan, also played beautifully, especially considering that the score was in a more "musical theater" style that classical musicians often fail to take seriously.

But while the performances and production were praiseworthy, parts of the opera were rife with glaring missteps.

One thing that always strikes me about a Mozart, or Verdi, or even a Strauss libretto is that there's a clear line between what a character says and what a character thinks. Something is left to the imagination -- not everything is said straight out, some plot points are implied, and it's up to the audience how to interpret that. Every person gets something different out of the opera.

Mark Campbell’s libretto tramples that line with reckless abandon. The characters themselves have no character because the libretto forces them to say every word that comes through their head — no filter at all. The result is an ineffective, crowded libretto that tells rather than shows, and characters who end up as personality-less, word-spewing automatons. This was especially glaring in the opening section of the opera, where each role got a five-minute arietta to explain their situation; some were more effectively written than others (Carlos’s firing was well-staged), but any monologue was wordy and altogether too long. It feels as if Campbell wanted to produce identical experiences for every member of the audience, which is not a tenable modus operandi for an opera

And that’s not even touching the issue of stereotypy — it was as if the composer and librettist painted caricatures of every type of LGBTQ+ person that would have existed at the time. And that’s exactly what the LGBTQ+ community has been trying to avoid in the recent past.

So overall, A+ for the nod to Stonewall's 50th anniversary and the pride month. A+ for the performances. A+ for the idea. A+ for the set, and costumes, and lighting.