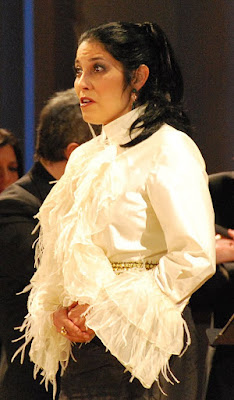 Her outfits are to die for

WHO: Vivica Genaux, mezzo-soprano; Aisslinn Nosky, violin; New York Baroque Incorporated
WHAT: Works by Corelli, Vivaldi, Handel, Hasse, and Geminiani
WHERE: The Venetian Theater at Caramoor
WHEN: June 30, 2019 at 4pm

June 30, 2019 was World Pride. Four million people poured into the lower quadrant of Manhattan and celebrated with rainbows and glitter and hoopla. I was not one of them. This could just be me, but being stuck in a four-million person crowd with no place to go to the bathroom doesn't exactly sound like my idea of a good day.

Plus, I rationalized, it's not like I hadn't been prideful for the entire month leading up to World Pride. I will direct you to concerts #23 and #25, which literally had the word queer in their names.

The truth is, I actually just made a dumb scheduling mistake. I was 100% convinced that the pride march was on Saturday 6/29, so I made plans with a friend's mother to go see this concert on 6/30 (yes, I'm that kid who makes plans with his friends' parents). Turns out I was wrong, and I decided that I wanted to see Vivica more than I wanted to buy a rainbow shirt and ruin it in one go by standing for eight hours in the sauna that is the West Village. Sue me.

Anyway, I think I made the right choice. Katonah is absolutely gorgeous. Everything is green. The air smells less like garbage (why doesn't NYC have dumpsters???? anyone????). I love NYC, but it's anything but a relaxing place. I took one step off the greenery-lined platform at the Katonah Metro-North stop and it was as if my responsibilities vanished -- crazy considering that I was probably ten concert reviews behind at that point.

Weirdly enough, Vivica Genaux never comes to the US. She made only two appearances stateside this year, and she has not a single one scheduled for the 2019-2020 season. Based out of Italy, she gives most of her concerts in western Europe.

The concert, at face value, looked like old-people bait. That one Corelli concerto grosso that everyone knows (D major, Op. 6, No. 4). The obligatory concerto from The Four Seasons. Vivaldi. Handel. Vivaldi knockoff. You know.

But New York Baroque Incorporated did a great job of treading the line between crowd- and connoisseur-pleasing. Their Corelli was whimsy and spontaneous as concertmaster Aisslinn Nosky  goaded solo second violin Alana Youssefian with a twinkle in her eye; on passages of repeated notes, Nosky dared Youssefian to rival her creative ornamentations (Youssefian obliged with a smirk).


The video looks a little bit like one of my fifth-grade iMovie projects, but the playing is top-notch!

Aisslinn Nosky stole the instrumental portion of the show. When I saw her in ChamberQUEER a few weeks before, her motions were moderate (the audience, after all, was about five feet in front of her), but her playing still effectively colored her the badass-du-jour. On the stage of the Venetian Theater, she let loose. Her stylings on "Winter" from The Four Seasons were agitated and overflowing a controlled, but chaotic energy; Nosky's emotion seemed more like that of a rock guitarist than that of a baroque violinist, her blood-red hair barely keeping its faux-hawk. And though harpsichordist Avi Stein was sitting in the conductor's chair, it was obvious throughout the concert that Nosky actually wore the pants in the ensemble -- once again the badass-du-jour.

Badass-du-jour, of course, apart from Vivica Genaux. As soon as she (and her dress-tail) swept on-stage, the presence was palpable. She alternated with facility between the opera seria archetypes: from lovesick, woebegone, and hopeless to oozing bravura at the very touch. Her technique was a little weird -- she produced vibrato and pitch changes by wobbling her lower lip, so even in the arie di bravura she still looked a little bit sad. But close your eyes, and you couldn't tell the difference. In the second half of the concert, she changed to a white pant-suit to sing Handel's cantata Armida abbandonata, the heart-rending story of a Saracen queen's lost love. She continued on with two encores written for Handel's favorite castrato (look it up if you don't know what it is) Farinelli, each delivered with joy and pizzazz.


Did you know one of the B's in ABBA stands for baroque? True story.

So TL;DR, no, I don't regret my decision. I came back to the city in the late evening and I was hydrated, fed, and had Handel in my ear. I heard World Pride was a spectacle to behold. But honestly, my biggest regret was not seeing the MET float, complete with Anthony Roth-Costanzo in drag and Stephanie Blythe in flashy surrealist garb. All the other corporate BS, I was happy to do without.

Caramoor's summer is almost over -- make sure you stop by before the end of the summer festival or for one of their precious few year-round performances!
at July 22, 2019