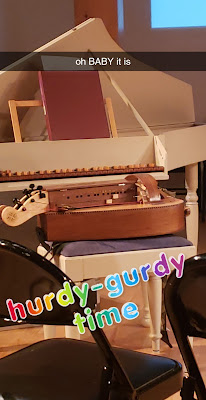 We're at the halfway point guys!


I sometimes feel like I need one of those Hermione Granger time-turner gadgets, because choosing between two phenomenal concerts always gets me stressed. In this particular case, it was either the second performance of ChamberQUEER or the Boston Early Music Festival’s stagings of three short French baroque operas. And in the end, I decided to go ChamberQUEER — French baroque opera makes my brain happy, but ChamberQUEER makes my heart happy.

Besides which, after the first concert, I had this lingering feeling that I was going to miss something monumental if I didn’t go to ChamberQUEER. And boy, would I have.

So I arrived back in Park Slope for the second concert, greeted again by the same lovely crew, and sat down in the tiny, stuffy room for another night of great music. Word had gotten out to at least some extent, so the audience was full, and mostly not of the same people from the other night. The performers, too, were all different (with the exception of the founder core and the harpsichordist) — they comprised an octet of singers, a couple of new violinists, and an electric guitarist.

Again, the program was pretty varied — everything from renaissance classics to new pieces, all tremendous. So here goes the laundry list again:

The concert started with a sing-in of original-feminist Hildegard von Bingen’s O quam magnum miraculum, accompanied by a real live hurdy-gurdy (played by harpsichordist extraordinaire Kevin Devine), followed immediately by a lovely Tennyson setting by ChamberQUEER friend and violist Jessica Meyer (she performed extensively at the first concert). A couple in manus tuas followed — first Tallis’s from a quintet of vocalists, then Caroline Shaw’s, as performed by attacca quartet cellist Andrew Yee.

There was only one fully instrumental piece on the entire program: excerpts from Mazz Smith’s 16 Hits or Misses. The name in itself is a disclaimer to the audience, but Smith, a lauded inter-genre violinist, was sure to provide her own warning that this piece “might not be that good.” I don’t know why she bothered to do that — the piece was charming. Modeled after the Bartók violin duos, Smith’s Hits or Misses straddled that ever-growing gap between classical tradition and popular music. I never thought I wanted to hear techno-funk played by two violins. But now I want to hear it again.

The final act of the first half was a series of scenes from Francesco Cavalli’s La Calisto — the basic gist being that Calisto rejects Jove, so Jove dresses up like the goddess Diana in hopes of wooing Calisto. Calisto, then wooed, attempts to nuzzle up to the real Diana and is swiftly rebuffed — FIN. Kind of a crazy gender-bent story from the beginning, with a ton of big gay energy (I thought homosexuality was taboo in the renaissance?) — perfect for ChamberQUEER! Mezzo Liz Bouk’s (he/him) passionate Jove was only outdone by his disgusted Diana — he has the PERFECT what-the-fuck face for the role. Danielle Buonaiuto’s (they/she) Calisto was suave and sensual, aided by their complete and utter comfort on the stage. Oh, and the sass-flecked subtitles set on a plain PowerPoint were a riot.

I know I put this in the first review, but I'm going to put it here again
because it's important! Support ChamberQUEER!

A short intermission switched the concert's gears to a cappella choral music sung one-to-a-part. The opener, Saunder Choi's American Breakfast, was a powerful statement about...well, everything. Gun violence, LGBTQ+ issues, all set against a bleak and boring all-American backdrop. It's a piece easily capable of gutting anyone with half a conscience, as it did to me.

The finale to the weekend-long ChamberQUEER experience was a set of four Monteverdi madrigals, but with a “ChamberQUEER twist,” as the founders put it. Guitarist Grey McMurray improvised connective material between each of the pieces, a prospect which bewildered me until the music actually began. McMurray’s experimental interludes essentially filled in all the genres that the Monteverdi couldn’t fill, with looping and microtones and echoes beyond belief — the perfect character foil to the similarly emotional, though stark and strict Monteverdi. The one that particularly stuck with me was the interlude before the final lament, the famous Lamento della ninfa in which a nymph bemoans her unrequited love; McMurray pointed out the essential crux of the renaissance madrigal by repeating the quote above. Lamento della ninfa itself was tremendous, with the nymph represented by countertenor Jonathan May; the gender-bend was refreshing, and May himself only got better as the part extended more into the nymph’s soprano range. Plus, McMurray used some of his pre-recorded loops to fill in the continuo line, which was just another layer of innovation.

Well, let’s just say I got exactly what I expected. The concert was fabulous. My pre- and post-concert banter was tolerated gladly. I turned down drinks again because I had work the next day.

Long story short: ChamberQUEER makes beautiful music in a space that questions the canon that has been shoved forth into our hands since early childhood. They are the future. Keep ChamberQUEER in mind, because one day they will be big. Mark my words.
at July 06, 2019