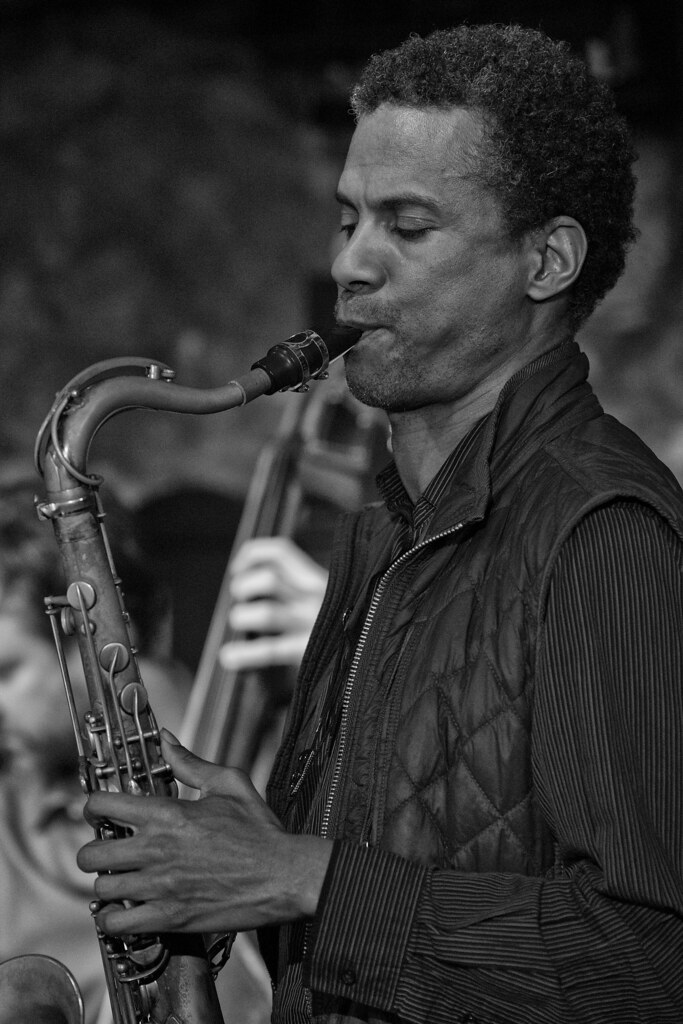 I'm not allowed to use the picture of them together, because it's under copyright. Boo.

WHO: Ethan Iverson, piano; Mark Turner, tenor saxophone
WHAT: jazz standards, mostly
WHERE: The Village Vanguard
WHEN: June 27, 2019 at 10:30pm

I, like many musicians, love music. I profess my love often. I talk about albums, concerts, everything. Hell, I'm going to 50 f*cking concerts this summer -- that's something that only someone who loved music would do. Will I still love music after 50 concerts? Stay tuned to find out!

I tell people that I love music because I'm not a good enough performer to sound like I love the music. When Hilary Hahn pulls out the Bach violin suites for the umpteenth time, her affect, her expression, her energy conveys her love to the audience in lieu of speech.

Having attended their concert, I can tell you with utmost certainty that Mark Turner and Ethan Iverson love music.

Iverson and Turner both approach jazz from different perspectives. Iverson's compositions are on the cusp of classical and modern, as evidenced from The Bad Plus's big Rite of Spring project from 2014. He still regularly performs classical music -- I just found out that he'll be playing Schubert's Winterreise alongside British tenor Mark Padmore next May. Turner, on the other hand, is a little more heavy-handed on the modernism. He's not exactly a mogul of free jazz, but he's done some things that my grandparents may refuse to recognize as jazz (Ornette Coleman IS REAL JAZZ GRANDMA).

So they met in the middle. Back to basics: blues and standards.

As you may recall, last time I saw standards, I was duly unimpressed -- I've just resigned myself to the fact that Renee Rosnes won't be inviting me to any of her garden parties in the future. Oh well. But there's a difference, I have found, between playing standards and playing standards like you mean it.

In any innovation, there's a degree of respect that has to be present. Iverson and Turner's innovative takes on Coltrane and Strayhorn and Just Friends were full of not only a love for the music, but also showed so much respect for the original composers. They didn't recompose or deconstruct any of the original framework, they simply infused it with a rollicking, Iverson-Turner flair. Think of it like a partially-possessed human -- when you hear Giant Steps for the millionth time, do you want to hear Coltrane, or do you want to hear the performer? Well, with Turner and Iverson, we heard both.

They didn't actually do Giant Steps. The whole set was far too laid-back for that. Iverson played a composition of his, something about duels and arguments, in celebration of the Democratic debate that was happening the same night -- even that felt like a debate between two people who had smoked a little too much pot. Not complaining, though. My brain was pretty fried by that point, and some easy listening was exactly what I needed.

This was the perfect everyman's concert. Two jazz icons, charismatic from the stage, playing to a weekday 10:30pm audience of about 12 people, playing fun, enjoyable music that doesn't require too much thinking. Were Turner's solos still perfectly thought-out? Of course. Were Iverson's 12-bar blues progressions still spot-on? Yes. But it wasn't finicky. It was simple, clean, and to the point. If you want to know what I mean, listen to their album from last year, Temporary Kings.