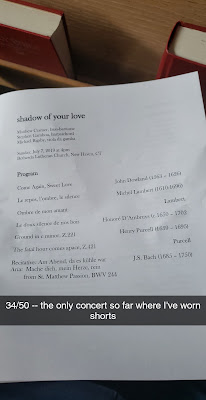 Concert #34: In Which I Immediately Review Someone Else I Know, Even Though I Just Said That It's A Bad Idea

I discovered this 4th-of-July weekend that New Haven is a ghost town in the summer. Some students stay behind for research; a moderate horde of high schoolers come for summer sessions. But when you walk around, the thing that strikes you is the quiet -- other than the cars, there's no student chatter around campus. It's part eerie and part relaxing.

I was only there for three days (I took a day go to visit my brother in Boston), but by the time my trip was ending it had been five days since I had seen a concert. Far too long, in my humble opinion.

Luckily, a couple of friends decided to beat the summer boredom (not the heat, mind you -- there is no air conditioning at Bethesda) with a half-hour concert of renaissance and baroque music. It was an intimate affair -- maybe twenty people in the audience, half of them wearing shorts and/or crocs (myself included).


I think Matt Cramer sang it in a better key, to be honest, but this is the best recording out there.

So, again with the reviewing-people-I-know thing -- it feels weird to write formal reviews about friends and colleagues, but here goes nothing. The programming for the concert was fantastic, full of tunes that I heard for the first time that afternoon and am still humming right now. Matt Cramer, though a choral conductor by trade, lent inventive and clearly-sung ornamentations. Stephen Gamboa-Diaz showed his harpsichord prowess both as an accompanist and as a soloist; Michael Rigsby rounded out the crew.

But the charm of this concert came not in the music-making, but in the purpose. This wasn't part of a summer concert series or anything like that. When I asked Stephen what compelled him to put on a concert like this, he shrugged and said, "I don't know, Matt was in town for a little while and it was time to do something other than sightread in our living room." And if that's not inspirational, I don't know what is.
at July 24, 2019