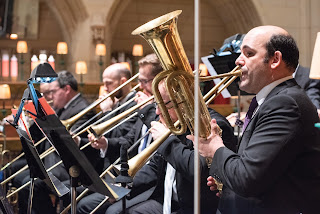 That's an ophicleide, the love-child between a tuba and a bassoon, but cooler (PC: Gregory D'Agostino)

WHO: Teatro Nuovo soloists, chorus, and orchestra
WHAT: DONIZETTI Symphony in E minor; ROSSINI Stabat mater
WHERE: Church of the Heavenly Rest
WHEN: June 27, 2019 at 8:00pm

I always feel a little bit mean when I review young artist programs. Like, I'm not currently a powerful reviewer by any stretch of the imagination, but what if a review of mine goes viral and ruins someone's career? I don't know. I could discuss the what-ifs of music criticism all day. But we just have to keep in mind what the wise Ratatouille character Anton Ego once said: "The bitter truth we critics must face is that, in the grand scheme of things, the average piece of junk is more meaningful than our criticism designating it so."

Now that I'm done being angsty and self-deprecating, I should say that I loved this performance. The young artists were great. No one's career is getting ruined tonight.
Everyone loves to perform German early romantic music as it might have sounded in Beethoven or Schubert's day. There are some fabulous period Beethoven recordings out there -- my go-to is the fiery symphony-and-overture cycle from Anima Eterna Brugge. But no one considers the historical sound of their counterparts down in southern Europe; Rossini's Barber of Seville premiered in the same year as Beethoven's seventh symphony! Perhaps it's that whole opera aesthetic -- howling is howling!


Listen to the beginning of Coriolan. Your soul will be seared.
Anyway, Will Crutchfield's Teatro Nuovo performs bel canto opera as it might have been at the time. Usually that means no conductor -- more on that when I go to see the fully staged operas. But this time, they were seated as an orchestra usually sits (except the bassists were divided, two on each side), conductor in front, just like usual.

The orchestra, made up of NYC's finest period-performance freelancers (i.e. all the same ones that played on all the other period performance concerts), started with a Crutchfield-led performance of a Donizetti symphony, one that hadn't seen the light of day since the bel canto-ist's heyday. The orchestra clearly had a lot of technical talent, but it was clear their opinion of the piece was similar to mine: perhaps it should be re-buried.

But the orchestra perked up for the Rossini Stabat mater, because everyone likes that piece. It's kind of like if Rossini wrote an opera in Latin. Is it the most pious work? Hell no. Did Rossini go to hell for setting a series of corny cabalettas to biblical text? Probably. But is it kind of fun? Yeah.

At the helm for the Rossini was Jakob Lehmann, who has regularly played with and conducted Anima Eterna Brugge in similar repertoire. His gesture was clear, his interpretation vibrant; he elicited something different out of the orchestra (or maybe that was Rossini, who knows?). The chorus ranks were filled with the Teatro Nuovo students, each of whom is an opera singer. The sound, while somewhat wobbly and unblended, felt authentic to the 19th-century Italian opera chorus that probably premiered the piece. 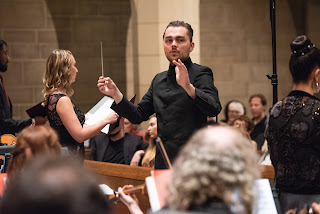 Of the soloists, tenor Derrek Stark stood out with his "Cujus animam gementem" -- the frequent octave-plus leaps sounded like no skin off of his back. The next movement's duo was equally memorable, with cheery soprano Christine Lyons and mezzo-soprano profundo Hannah Ludwig blending their vibrato perfectly. Ludwig, unlike most mezzos I've seen, took her cadenza to the lowest part of her voice instead of the highest part; she convincingly hit a note low enough that mezzos don't usually sing it.

Teatro Nuovo is an incredible project, and they execute their mission flawlessly. I know this is short notice, but if you can you should go see Teatro Nuovo, this Wednesday and Thursday, doing Bellini's La straniera and Rossini's La gazza ladra, respectively. I know I'm going to be there.
at July 15, 2019