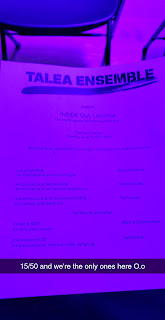 Yes, the lights were actually that shade of purple

WHO: Matthew Gold, percussion; Ted Moore, composer and performer
WHAT: iNSIDE OUT series: Lacunae
WHERE: The Flea Theater
WHEN: June 9, 2019, 4:00pm

You know when you're sitting in a seminar and the professor asks a really good, thought-provoking question? And then everyone just sits there silently, staring wide-eyed at each other, hoping someone will speak up?

Yeah, I hate that -- not enough to actually break the silence, but definitely enough to stew silently in hatred.

Now that I think about it, I may be part of the problem. But that's beside the point for now.

Anyway, I thought I had escaped that awkward, awkward feeling for at least a couple months. But then I went to this concert -- which, mind you, I ended up really enjoying. But seminar-style discussion is awkward enough with people you know, let alone with a group of strangers.

Anyway, I've never seen the full Talea Ensemble live, but from what I've gathered they are one of the more community-minded New York classical contemporary ensembles -- in a world where so many people hate new music for "the way it sounds," Talea is trying to foster a culture of informed and engaged contemporary music consumption.

The iNSIDE Out series always comes with a theme -- this one had to do with lacunae, or empty spaces. It's an interesting concept in music; many of my teachers have insisted that rests are actually misnamed, as they are simply times to get ready for the next moment of playing.

I happen to completely disagree with that notion. Think about music without empty spaces -- isn't that just an unmeasured, mono-timbre wave of pitch? But that's getting into semantics.

This was probably the most interactive concert I'd ever been to: word associations, Mad Libs, seminar discussions, and more. As my date so eloquently put it: "I thought we were going to a concert, not group therapy." 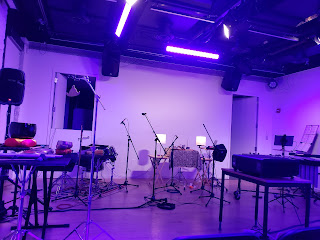 The Lilliputian drumset is in the middle

Though the format of the concert was a little bit weird, the music was super interesting. All of the pieces were scored for percussion and live electronics, but, as I discovered, that can mean a whole range of things. One piece was scored for vibraphone with echo effect; another for miniature drumset (not a drumset with fewer instruments, but a drumset that looks like a fixture for a hamster's cage). The most fascinating piece was scored for cymbal and feedback loop. The performer basically held a microphone at variable distances from the cymbal (which had an attachment that kept it constantly vibrating ever so slightly), creating "pitch" of sorts. Was it always the most pleasant sound? No. But was it interesting? A thousand times yes.

The concert portion of this performance was certainly worth going to. Talea percussionist Matthew Gold crashed, banged, and boomed with enthusiasm, though never recklessly so. The compositions were innovative in a vein that I had never really explored before. That being said, the discussion could have used a little bit more thought -- maybe a round of introductions first? There were only six of us, it wouldn't have been that hard: "Hi, I'm Emery, I'm a college student, and I like music."
at June 16, 2019