WHO: Baroque in the Fields sponsored by Gotham Early Music Scene
WHAT: Telemann Paris Quartets and solo fantasias
WHERE: Church of St. Luke in the Fields
WHEN: June 2, 2019, 3:00pm

Telemann came at an unfortunate time in music history, at least from a modern perspective. His music is, for the most part, tremendously well-written and creative, but he's been wholly overshadowed by a composer we all know and love: Bach.

The two are, on paper, very similar. They both lived around the same time (though Telemann has a few years over Bach on either end); in fact, Telemann was the first choice for the job of cantor of the Thomaskirche in Leipzig, the job that eventually went to Bach and caused him to write so much of his sacred organ and vocal works. Telemann ended up with a similar, better-paid job in Hamburg.

Twelve solo violin works to Bach's six; twelve solo flute works to Bach's one; twelve fantasias for solo bass instrument (viola da gamba as opposed to Bach's cello) to Bach's six; there is no question that Telemann was equally prolific to Bach. And I would argue that Bach is not "better" in the strictest sense, he was just lucky enough to have fiery revivalists on his side (namely Felix Mendelssohn in the 1820s).

I'm always thrilled when people choose to put on Telemann concerts. It feels to me like they're uncovering a hidden gem, one that people don't hear nearly often enough. So I dragged my friend to this lovely, free (free!) Sunday afternoon concert in the West Village. From what I gathered, the concert was another effort of the fine folks over at Gotham Early Music Scene: bringing early music to the masses since who knows when.

On tap were a smattering of Telemann's Paris Quartets, published in two volumes (1730 and 1738). The catch is that Telemann didn't actually visit Paris until 1737; the first set of quartets is no more Parisian than anything else coming out of Hamburg at the time. But, the second set was so associated with Telemann's celebrity visit to Paris that they were all sort of lumped together in history's ever-reductive eye. A few of Telemann's aforementioned solo works rounded out the program.

"What do you mean you've never heard of me? I'll have you know I'm VERY famous in Paris."

Can you tell I resent the fact that we didn't learn about Telemann in my music history class? I'm having flashbacks to the time I asked my TA why we skipped over Telemann and it ended in a ten-minute rant session about how good Telemann is. And that all happened by shouting/sign-languaging across an opera pit. Oop.

Some parts of this particular performance shone brightly. Flautist Immanuel Davis, a frequent duo partner of Berthold Kuijken (a member of the Kuijken family, three of whose five children are partially credited with the recent resurgence of historically-informed performance). His solo pieces, two fantasias played without pause, were impressively virtuosic without compromising the flavor of the music. His slower passages oozed aristocracy and nobility, while his faster runs were nimble and deft. In the quartets, he shone both as a leader and an instrumentalist.

Harpsichordist Dongsok Shin's fulfilled both of his roles in the performance -- first and foremost as an accompanist, but later on also a soloist -- with admirable flair. His continuo underpinnings were never too flashy so as to take away from the solo players, but were always reliable and tactfully timed. As a soloist, he approached his fantasia with restrained abandon, milking every ounce of passion he could out of a temperamental instrument like the harpsichord. 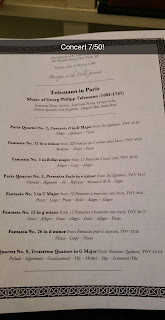 Motomi Igarashi, the viola da gamba player for this performance, had her highs and lows. In the slower passages, her interpretation and tone were impressively strong; in the faster passages though, the bow seemed to often slip out from under her. Of course, I should give her the benefit of the doubt because the gamba parts for the Paris Quartets are twice as hard as the flute part and the violin part combined -- read: unplayable by mortals. Igarashi is a specialist on the lirone, an instrument that is like if the gamba could only play chords and nothing else; considering her strengths and weaknesses, I can easily see her being a master of this unusual instrument.

Violinist Leah Gale Nelson, though equally impassioned to her peers, fell a bit short in the technique department. It appeared that she was putting an inordinate amount of pressure on her bow, causing notes to crack or -- worse yet -- not to sound at all. That, combined with her sometimes *interpretive* intonation, detracted from an otherwise musical and enjoyable performance.

I'm of the opinion that it's hard to go wrong with a free concert, and I'm very glad I happened upon this one -- shout-out to Fred, the greeter from the Abendmusik concert I went to last Friday, for letting me know about this concert! Overall, I'm glad I went and I'm looking forward to GEMS's next season.
at June 06, 2019