I've been known in the past to give tepid, if not negative reviews of the NY Philharmonic in the past. I saw them a couple times in their last season with Alan Gilbert, and their affect often seemed listless at best. It seemed like a group of accomplished soloists each playing without much regard for what the rest of the orchestra was doing.

I'm glad to say that era is on its way out. Jaap van Zweden, the notoriously fierce Dutch conductor who took over as the Phil's music director this year, is fixing them. The orchestra will almost certainly be back to its Bernstein-era glory in a few years.

Still, though, the Phil is in an intermediate period. There are moments where everything clicks and they sound like the most expressive, polished orchestra on this side of the Atlantic. One of those moments was at the beginning of the Brahms's Tragic Overture, which started this concert. Quite frankly, I find the piece to be very take-it-or-leave-it. Is it better than I could have written? Absolutely. Is it Brahms's magnum opus? Nowhere near. But the Phil brought certain moments to life -- the opening (and the recap) sounded almost like a period ensemble, with hard-sticked timpani and vibrato-less strings, a timbre that van Zweden clearly thought out well. The rest? It was fine.

I suppose I should mention the caveat that I had a TERRIBLE seat for the first half of the concert. The box office refused to sell me a student-priced ticket (even though there were empty seats everywhere?????), so I was stuck with the only other seat that was in my budget: top floor, side boxes, partial view. And it was still twice as expensive. UGH. I moved to a top-floor front-facing seat for the Corigliano (and thank god I did -- that partial view would have blocked out the mandolinists!). 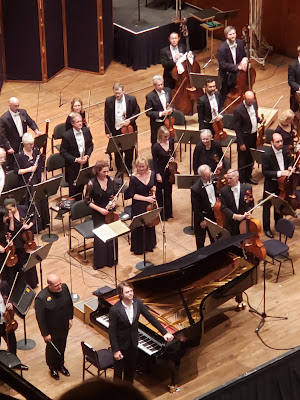 To give you an idea of where I was sitting...Fray, van Zweden, and the orchestra

Both of Mozart soloist David Fray's last two albums have been Bach interpretations -- his concerti for multiple keyboards in 2018 followed by his sonatas with star French violinist Renaud Capuçon. I've like his Bach (much as I usually prefer my Bach on harpsichord), so I was interested to hear his Mozart. His Mozart (the 24th piano concerto) struck me as a little far removed from his Bach; his use of pedal was a little more liberal than I would have liked, though not totally outlandish. That being said, his slow movement was incredible: heartfelt, musical, and not too soupy. Special mention to the wind section Phil for that same slow movement. 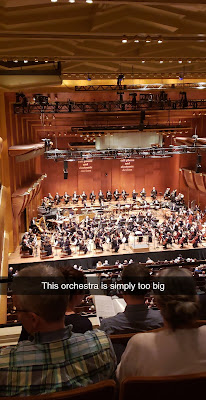 I was proven wrong. But I still don't think the mandolins were *totally* necessary.

I really didn't want to like the Corigliano. At first glance, the orchestra seemed too big, almost big for the sake of being big. But John Corigliano himself came onstage and gave some verbal program notes, on the verge of tears as he remembered the people this piece eulogizes, friends of his who died in the AIDS epidemic. Once the piece started, I understood why that orchestra was so huge. Corigliano accurately encompasses so many emotions in this piece -- terror, sadness, wistfulness, nostalgia -- that even the most emotionless of listeners is moved.

The highlight of the piece was the opening of the third movement, in which principal cellist Carter Brey delivered a solo (in commemoration of a cellist friend) that was not only polished, but also so deeply felt that a cavern opened up in my stomach and I was fighting back tears. Overall, a tremendous performance.

If you get a chance to see the NY Phil, certainly do it. While they are not necessarily the best orchestra in NYC (that honor goes to the MET Orchestra), they are definitely worth a visit, even in their acoustically dead hall. But, more importantly, if you get a chance to see John Corigliano's Symphony No. 1, jump at it. I hear the Chelsea Symphony is doing it at the end of this month (June 29-30), who's going with me?
at June 01, 2019