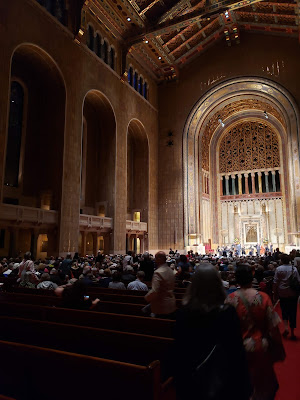 That's all I can think when I sit in the audience of live-broadcast concerts. A cough is forgivable; a sneeze even more so. But if those WQXR microphones are poised just right, your toot could be the talk of the nine people who still listen to live concerts on the radio.

This concert was the opening of this year's Naumburg Orchestral Concerts, so named for the Naumburg Orchestral Shell in Central Park where they're usually played. However, 114 years of free orchestral concerts can take its toll, and the shell was in dire need of some TLC, so the concerts were moved for this year to the gorgeous (GORGEOUS) Temple Emanu-El on E 65th. Good thing, too -- it was rainy and disgusting while we were standing in the long, long line to get inside.

The Knights are one of the more active independent orchestras in New York City, the kind that starts with friends playing chamber music in someone's living room. This was their tenth consecutive appearance at the Naumburg series, and you could tell they felt right at home. This concert was a dual celebration: first and foremost, they were celebrating the 200th anniversary of Walt Whitman's birth. However, they also managed to get their hands on a tremendous Amati viola which was celebrating its 400th birthday -- move over, Whitman!


The full WQXR broadcast from the other night, fart-free!

Though Kristina Nicole Miller was credited in the program as a "narrator," her singing was one of the highlights of the first half. Kyle Sanna's Whitman composition, after a section of Song of Myself, morphed into something of a Disney-meets-modernism situation -- very interesting indeed. Miller would have been right at home as a Belle or Ariel, but her clear understanding of the complex Whitman propelled her far ahead of any Disney aspiration.

Lisa Bielawa's piece took many a cue from composer and amateur ornithologist Olivier Messiaen, weaving birdsong in and out of the gossamer orchestral texture with impressive aptitude -- though Bielawa's birdsongs were not taken from real birds, they were just as convincing as any material Messiaen drew from. Flautist Alex Sopp channeled her inner avian as though she'd been doing it regularly all her life; hornist Michael Atkinson played similarly well, but the gorgeous (GORGEOUS) Temple Emanu-El's acoustics did him a disservice by swallowing him completely.

The Amati came out in the hands of violist Nicholas Cords for Britten's Lachrymae, a piece modeled after John Dowland's 17th-century consort work of the same name. Cords played ridiculously well, from what I could hear of him -- Emanu-El is harsh on all mid-range instruments, not just horns. Too often, modern reinterpretations of early pieces suffer from hypermodernization; Cords and The Knights, under the functional baton of Eric Jacobsen, infused the Lachrymae with almost as much Dowland as Britten.

As for the Mendelssohn -- well, it certainly did the job. Eric Jacobsen pulled out his cello and joined the lively octet with his brother (concertmaster Colin Jacobsen), Nicholas Cords (400-year-old Amati in his hands), and five others from the orchestra. It was great. It was everything you wanted from chamber music. By the time the ensemble played the final E-flat chord, I was fully convinced that a) they had been playing together as an octet for years, and that b) they were all best of friends. Whether either of those were true, who knows, but that's the kind of emotion they exuded, and let me tell you, I couldn't wipe the grin off my face for the rest of the evening.

Free concerts are always worth it, but that doesn't mean that some free concerts aren't better than others. The Knights have impressed once again that not all great music has to come at a great price; some organizations care more about serving their audiences than they do about turning a profit. All musical ensembles want to serve their communities to at least some extent. And I think the Naumburg series has refined that art down to a T.

Stay tuned for the next Naumburg concert on July 10: Venice Baroque Orchestra with Anna Fusek, recorder!
at June 25, 2019