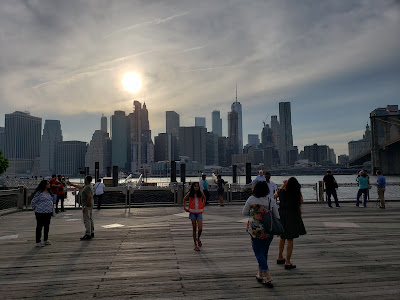 Note: that boat is not Bargemusic

I would like to start by saying that Conrad Tao showed up to his own concert in knee-length black capri-chinos, which is probably the biggest power move I've ever witnessed.

And now back to your regularly scheduled programming.

Bargemusic is another one of these intimate Brooklyn concert venues that makes you go "awwwwww." Right outside of the joggers-with-strollers haven that is Brooklyn Bridge Park, just down the street from the snaking lines at competing pizzerias Juliana's and Grimaldi's, is a beautiful dock with possibly the most phenomenal, up-close view of the bridges on either side of the East River (pictured above). Tethered to the dock is usually a smattering of party boats, but this Friday night all of the party boats were off loaded with drunken twenty-somethings. Tonight there was only a small white boat with an abandoned ceiling deck and a dent on every surface. That, friends, is Bargemusic.

Inside, visitors find a single, wood-paneled room with a folding table at the front for ticket sales. We slipped in behind a few tourists who were very confused at the fact that the upper deck wasn't used for concertizing (because, after all, grand pianos love nothing more than humidity and unpredictable rain-storms), and took our seats.

I don't usually go crazy for front-row seats -- as I've mentioned in a couple of my previous reviews, I like to hear the sound after it's had a chance to blend in the room. But for some reason, it seemed right for this concert. 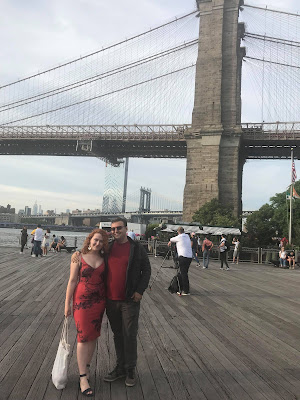 The musicians were screwing around off to the side of the stage, the only place at Bargemusic that could even mildly be construed as a "backstage area." I use quotation marks because it essentially looks like a mudroom, but without a door or walls -- a couple coat hangers and a couple benches, and the staircase (okay, it's actually like one stair) up to the stage.

For those of you who don't know, Messiaen was drafted into the French army in WWII; he was captured at Verdun and taken to a prisoner of war camp in Germany. Luckily, he had already made something of a name for himself in the musical world, so the army gave him special treatment -- he was given a composition studio with a piano. He wrote the Quatuor entirely at the camp, and it was premiered by him and three of his fellow prisoners outdoors on a rainy January evening.

This is a piece that tests not only every facet of your technique -- how fast you can play, how slow you can play, how in-between you can play -- but first and foremost how much soul and anguish you can impart into your playing. There is nothing uplifting about the Quatuor; even the most beautiful moments are sodden with dissonance and pain.

I can barely put into words the performance that these four phenomenal musicians put forth. At the end of the concerts, my friends and I could do nothing more than look at each other, tears in our eyes, and say, "Wow."

The quartet imparted every bit of distraught passion that Messiaen wrote into the score -- and then some -- into that hour-ish of playing. They were perfectly zoned into each other the whole time, even when they weren't playing. Yoonah Kim's solo clarinet movement (Abyss of the Birds) was extreme in the most wonderful of ways. The infamously long pianissisimo (very very soft) to fortissisimo (very very loud) notes lasted upwards of 30 seconds (thanks to circular breathing -- pushing air out of your mouth while taking more air in through your nose), starting so imperceptibly that I thought her instrument had broken right in front of us on stage.

The leap-of-faith climax-to-meditation moment about two minutes from the end of Zlatomir Fung's solo movement was possibly the most delicate moment of music I have heard so far this summer, save for the congruent moment in Stefan Jackiw's movement -- it's a tie. And all the while, Conrad Tao, without a solo movement for himself, in turn accompanied dutifully and tastefully and shone in his own right, his smart touch ekeing every last timbre out of Bargemusic's Steinway.

I wish I could do justice to this performance with words. But I can't. All I can say is that somehow, everything felt right. The waves sloshing against the dock, the boat rocking at what seemed to be choreographed moments (and I say that as someone who gets violently seasick), even the EDM track that was wafting through the window from afar as the final notes of the final movement sounded. June 7th, 2019, from 7pm to 8:10pm, was a perfect moment.