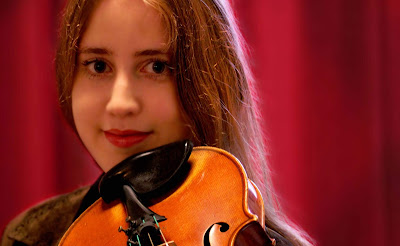 Not gonna lie, I've been a scaredy cat this summer. I chickened out of talking to Caroline Shaw. I haven't gone up to talk to any artists after concerts unless I know them.

Well, I decided that was going to change a couple weeks ago. After this concert, I spotted someone with a violin a couple feet ahead of me. The strange thing was that she wasn't in concert black, even though the concert had ended not five minutes before.

And then I looked at her hair and had a light-bulb moment. I turned to my friend and said, "I recognize those beautiful blonde highlights."

It was Vilde Frang, walking back to the subway. As one does when in New York.

Yeah, I accosted Vilde Frang on the street to tell her what a great performance she gave. We talked for all of 30 seconds. I found out that the cello is her favorite instrument (not that I asked that specifically -- what am I, a middle schooler at an open rehearsal Q&A session?). It was moderately awkward. She seemed flattered. I would have been intimidated, butt then again, a chubby 20-year-old outwardly gay concertgoer with two days' worth of five o'clock shadow isn't exactly something to be scared of.

But of course, I didn't tell her I was reviewing the performance. Maybe should would have been a little more intimidated by me then.


Me at, like, every single concert so far this summer

Everything I said to her was well-deserved. Her performance was one that satisfied my inner musician. She didn't show off; it felt like her mission was to deliver the most honest, enjoyable interpretation she could muster. Vilde Frang served the music, which is something that so few of the big popular soloists do effectively. During the orchestral interludes, she seemed to get lost in the texture, staring off into the distance, making way for her colleagues -- she treated the orchestra as equals, not inferiors -- to work their magic. Her playing was aggressively precise, but didn't sacrifice any of that introspective simplicity that I crave from middle Beethoven.

I walked out of the first half of the concert convinced that the Beethoven violin concerto was the best piece ever written. I kind of get that way every time I hear the Beethoven concerto. I'm not sure if that opinion is defensible, or even if I believe it. But you know, even if I don't truly believe it, I'd be happy to defend that opinion any day.

In my first post of the summer, when I went to see the S.E.M. ensemble, I mentioned that I turned down an opportunity to see the NY Phil playing Beethoven's Third™ because I knew I'd get to see it again in the near future. The fact that, not even two months later, a different orchestra is playing the same piece in the same hall should validate my decision.

That said, I'm pretty sure the MMFO did a better job than the NY Phil would have. I mean, the orchestra gets together every year to play *mostly* Mozart (oh, that's why they call it that!), so it felt like they were in a more appropriate mindset for that late-classical style. The word that Andrew Manze's interpretation drew to mind was light -- even in the loudest climaxes, there was still a wind blowing the orchestra from underneath, keeping them bobbing along to the sometimes-rollicking, sometimes-sagging beat. Special mention should go to the first oboist of the orchestra, Katherine Needleman, whose solos contributed to the levity from atop the orchestral texture. All of her solos, whether twenty measures or two, made me feel that amazing shiver up my spine.

God, I'm so glad I went. And now I've proven to myself that I have the balls to approach performers after concerts. Now, I try to rationalize it by assuming that people like to hear how great they are. But is that actually true? Do performers actually like being approached by strangers?