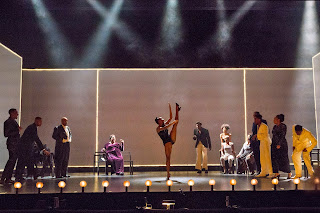 As I'm sure you've gathered, I've been in NYC all summer, but I haven't really made time for many "New York" things. No Governor's Island. No museums. You know.

Most lamentably, I haven't really made much time at all for Broadway shows. I do love musical theater, even if my métier is primarily classical. But they're expensive. And they're always at the same time as classical concerts. And they require going down to the ninth circle of hell: Times Square.

The Black Clown wasn't *exactly* a Broadway show. But it was the closest I was going to get within my price range (MMF gives out student tickets for $20). And I have to say, I enjoyed it tremendously.

The concept basically chopped up Langston Hughes's poem The Black Clown into bite-sized chunks -- two to three lines at most -- and used each to base a movement (scene?) of the staging. The music showed MMF's initiative in breaking out of the strictly classical world: the pit orchestra was more of a big band, the ensemble singers evoking a gospel feel.

And at the center of it all was Davóne Tines, one of the most versatile opera singers I've ever seen. Sure, Renée Fleming has her Broadway album. Joyce DiDonato did her jazz-baroque mashup. But Davóne Tines is making his name with these cutting-edge crossover projects, not riding on his pre-established reputation so he can do something "weird." 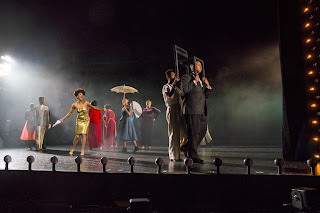 Tines, clad in a black and white pleated zoot suit (this time with a shirt), was the perfect choice as a centerpiece for this project, but his phenomenal performance still rested in the second-place slot. The ensemble of singers, dancers, and actors took what was already a musically and socially meaningful production and made it dazzling. The ensemble was at once a gospel choir equal to some of the best on earth; a West Side Story-level dance troupe; and the catalysts for every emotion Tines displayed from the stage (and there were many). Tenor Brandon Michael Nase deserves special mention for striking a balance between minute, detail-oriented musicality and a soaring, piercing tone.

Each movement was fabulous in isolation; the scenes took all forms, from upbeat-swing big band charts to wrenching ballads and even a couple instances of authentic 1920s banjo jazz. The music Michael Schachter composed was stylistically appropriate, if not so adventurous; the highlights were his arrangements of various spiritual tunes, including a tear-jerking rendition of "Motherless Child." The piece as a whole read more as a song cycle rather than a through-composed work; there was very little functionally connecting each movement to the next. I did not find that particularly bothersome, but I think that a super-sudden transition from jubilant celebration to dour, prayer-like solemnity is a little bit hard on the audience as a whole. 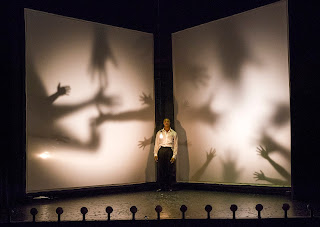 I couldn't say this in my previous review of him, but I'm just going to sum up with one final thought: Davóne Tines is worth seeking out. He's a voice of the future. He's only going to get more popular. I'm not sure where The Black Clown is headed next, or if there are even plans to do it again soon. But no matter what, you can never go wrong with Davóne Tines.
at August 16, 2019