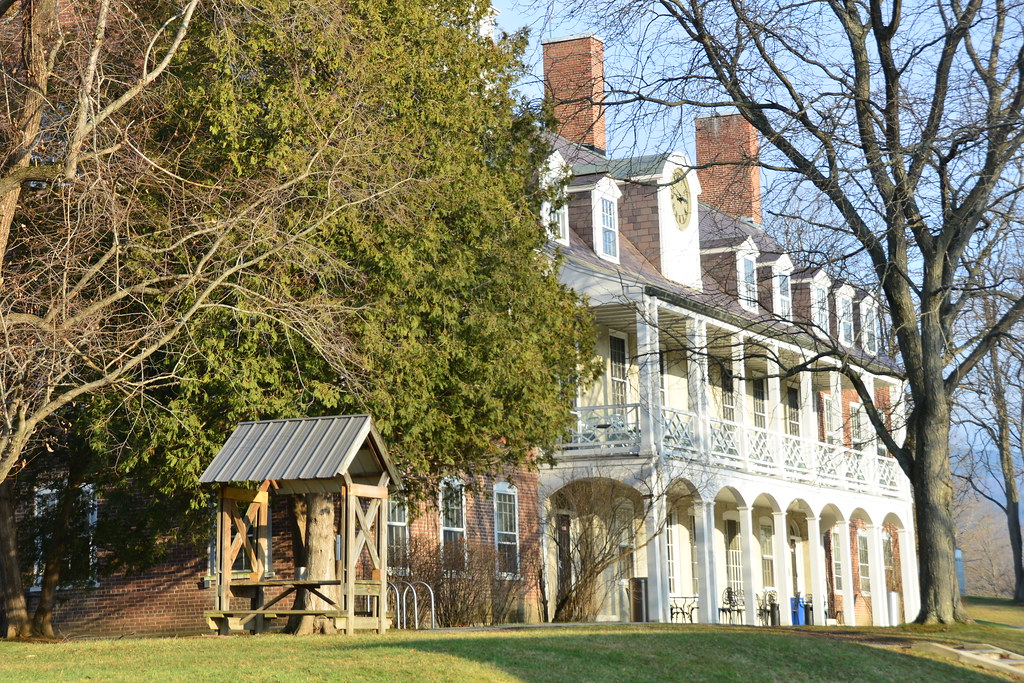 WHO: Faculty of Chamber Music Conference of the East
WHAT: MENDELSSOHN String Quartet No. 6, Op. 80; MOZART String Quintet No. 3, K. 515
WHERE: Greenwall Auditorium, Bennington College, Bennington, VT
WHEN: July 31, 2019 at 8:00pm

Ultimately, I decided not to write a college essay on Kinhaven, my most formative music camp experience, for much the same reason I didn't wax poetic in my last post -- I didn't/don't think I can put words to paper that express how much that location means to me.

I also love Bennington, a weeklong summer chamber music camp for grownups in southern Vermont. But it's less emotional for me, mostly because I can keep going back summer after summer until I keel over. So I wrote a college essay about it -- nothing long, just one of the 300-word essays.

And as I was thinking about what to write for this post, I thought to myself: who better to tell you what Bennington means to me than 17-year-old me trying to pander to admissions officers? If I convinced them, then certainly I can convince you(?).

Here it is: my Bennington essay, unedited from the time I hit the "submit" button.

"It’s my first day at Bennington Chamber Music Conference in Vermont, where I’m the only teenager among several hundred amateur musicians. I take my cello out of my case and sit down. I start to leaf through the piece in front of me, the famously difficult Mendelssohn Octet. My stomach churns. I chat nervously with the other players for a while as we wait on our first violinist. We hear a knock on the door: it’s Shem Guibbory, a violinist from New York’s Metropolitan Opera Orchestra.

"My week at Bennington was a baptism by fire. I expected a relatively low-key experience; I had just come from six weeks at another intense music camp, and I assumed I’d have some time to relax.

"I was wrong. A friend explained the schedule: in addition to two professional coachings per day on pre-practiced pieces, there were four free periods per day to sight-read. The typical day started at 9am and didn’t end until midnight. And playing with seasoned professionals was the norm, not the exception.

"That first day, I sight-read 6 full pieces, in addition to the ones on which I was being coached. By bedtime I was catatonic. But I was learning. Reading Allen Shawn’s Dreamscape cemented my love for modern music. Shostakovich’s piano quintet reminded me that as the cellist, I was responsible for driving the music forward.

"Most of all, Bennington showed me how I want to live. The enthusiastic amateur musicians around me had demanding jobs (doctors, professors, and environmental scientists, just to name a few) but all had carved a week out of their busy schedules to play chamber music in the mountains. It was here that I realized that I want music to be a part of my life forever, but I don’t want to play for a living. I want my career to challenge me intellectually and support me and my family, and I want to spend my vacations making music with friends in the mountains."

I don't know why, but when I read that in my head, it's in a pre-pubescent 12-year-old Emery voice. Does that mean that in 20 years, when I look back on these posts, I'll read it like that, too?

I should take a moment to mention that the Mendelssohn on this concert was truly astounding. Bennington's faculty have just as much fun as the participants -- because Bennington is all adults, the coaches can be more relaxed and open with the students than they could be at a high school festival. But don't be fooled -- each faculty member is alarmingly accomplished.

The Mendelssohn quartet was headed by Diana Cohen, concertmaster of the Calgary Philharmonic. Personally, I think she should quit that job and become a full-time chamber musician, she played that well -- the amount of fiery soul she managed to impart in those 25 minutes is completely beyond words. Second violinist Alex Fortes (who, it turns out, was sitting not ten feet from me at ChamberQUEER earlier this summer) mirrored her affect perfectly, providing a support network for her to soar. Violist Korinne Fujiwara (of the Carpe Diem quartet -- also a fantastic coach) and cellist Maxine Neuman (a longtime festival mainstay and Bennington College faculty member) rounded out the jaw-dropping ensemble.