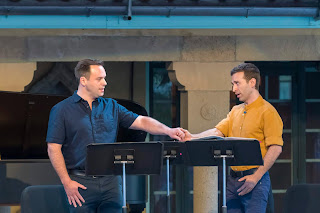 One moment before God decides that the Abraham-and-Isaac
telenovela doesn't need to end like Orange is the New Black did
(intentionally vague to avoid spoilers -- if you know, you know)

Just a short one for today, because I reviewed this concert for Opera News (I think it'll be published in October along with my last one?) and I can't release any spoilers! So here are a few things that didn't make it into my review: