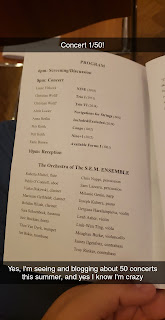 Quite frankly, I don't know where those 50 reviews came from. It's almost like writing an all-nighter paper: the words are all there, and I definitely wrote each and every one of them. But the whole process is kind of a haze.

But alas, 'tis done. 50 concerts. One summer. It happened. I learned a lot.

I learned that hopping on the subway and going to 50 concerts is not that hard. I also learned that writing 50 reviews is significantly harder and more time-consuming,

I learned that my writing leans far too heavily on em dashes, semicolons, and parenthetical asides, but I've been told that's just a phase.

But most of all, I learned that I love going to concerts. Everyone who questioned this project (and there were a lot of people who did so) was right: 50 concerts is really too many. I spent an inordinate amount of time this summer seeing, writing about, and talking about concerts. But thinking back on it, what would I have been doing instead? Sitting on my ass and watching Netflix? Rest assured, I did plenty of that too -- the last season of Orange is the New Black wasn't going to watch itself.

The concert experience, I now realize, can be so many things. Go to a concert alone and it's a night off. Go with one friend and it's date night. Go with a group and it's a party. Concert in a neighborhood you don't know? Field trip. Concert three blocks from your house? Home-court advantage. One hour long? Time for dinner after. Four hours long? Better bring snacks.

It's not like I was trying to run 50 miles or taste 50 cups of coffee. The only common vein running through my 50 concerts was, well, music. Variety is key. I would have torn my hair out if I was working towards, say, 50 Beethoven performances in one summer.

So guys, I know this project was mostly self-serving (I have a portfolio for job applications now!), but there is a moral to the story. Go hear live music. Yes, I pay $10 a month for Spotify, too. But there's nothing quite like seeing a real, live human make real, live music in person. They are literally there to please you, and you are there to be pleased.

And more than just going to concerts, dig deeper than the surface. I ended up at so many tiny little concerts that I only found out about thanks to Facebook's alarmingly sophisticated suggestions algorithm. Don't just siphon money into your local symphony orchestras and opera companies. Find out what the community is doing. Go see a concert where you're on your own and don't think you know anyone; chances are the people running it will greet you with a smile, pour you a glass of wine, and make small talk with you until you're one of the family.

It's been a great summer, guys. Thanks for following along, and stay tuned for more ridiculous concert projects -- ten concerts in five days during my October break, maybe?