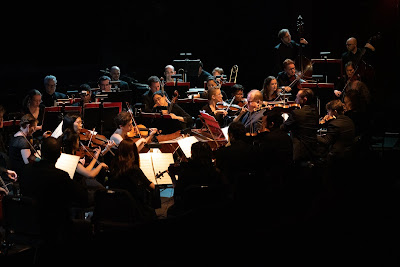 I open my computer. My stomach is in knots. The clock is counting down. Sweat pours down my face. I begin to hyperventilate. The stress is killing me. My hand, shaking violently, reaches for the mouse.

Yeah, that's what happened last time I had to choose between two concerts I really wanted to go see. Sometimes I think I'm too invested, y'know?

Anyway, I know I said at the beginning of the summer that I was choosing concerts based on what thought I would like most. Unfortunately, I like a lot of things, and sometimes I can't choose. So I've had to rely on another metric for deciding on concerts: the reproducibility factor. I always take into account the likelihood of getting to see a given concert (or one similar) at some point in the future. That's why I decided to go see the SEM Ensemble instead of Beethoven's Eroica at the NY Phil for the first concert in this series; why I went to go see ChamberQUEER instead of Boston Early Music Festival at Caramoor; why (in part) I decided to go see Vivica Genaux instead of going to NYC Pride.

So, when Teatro Nuovo's staged operas rolled around, I cleared my schedule, put on a tie, and walked up the five flights of stairs to the Jazz at Lincoln Center lobby.

Okay no, not really. I took the elevator. But the necktie part is real. 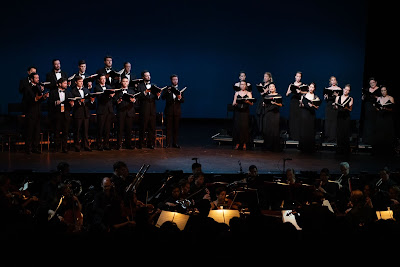 Bellini's La straniera ("The Stranger") barely ever gets performed, falling at the feet of his more famous Norma, Puritani, and Sonnambula. The plot, as with many bel canto operas, is predicated upon a misunderstood love triangle -- Arturo loves Alaïde (the straniera in question), but thinks she is having an affair with Valdeburgo. Arturo tries to kill Valdeburgo until the "oh shit!" moment when he realizes that Valdeburgo is Alaïde's brother. Valdeburgo survives the attempt, Alaïde is dragged off for the murder, Arturo is urged to marry the woman he was originally planning to marry before any of this started (her name is Isoletta, she's only mildly relevant).

Except then it turns out that Alaïde is actually queen of France. So when Arturo botches his own wedding to beg Alaïde to run off with him, she is summoned back to the throne. Arturo is understandably sad. He kills himself. Alaïde is also sad. She threatens to kill herself. Curtain.

Ah yes, the Italian tragedy: only distinguishable from the Italian comedy in that, at the end, everyone dies instead of marrying each other.

So, I'm going to go out on a limb here and say something. I think comparing the Teatro Nuovo orchestra and choir is unfair. The singers are part of a young artists' program, still gaining valuable experience in the operatic field. The orchestra is the usual circuit of period-performance freelancers, many of whom I've already seen elsewhere this summer. So here are their separate reviews:

THE SINGERS: Great voices up on that stage. Tenor Derrek Stark was a poignant and relatable Arturo; soprano Christine Lyons's arias brought Alaïde's alienation to the forefront; baritone Steven LaBrie's Valdeburgo was rich and sweet, but not overly covered; mezzo Alina Tamborini rocked a confused Isoletta. But, for the great singing tone, the acting was somewhat anemic. Perhaps if there had been more staging to work off of, it would have been better, but the body movements were muted and awkward, the facial expressions barely expressive at all. Only LaBrie seemed to occupy the full character of his role. The chorus, made up of the rest of the young artists in the program, sounded as good as any professional opera chorus, their Italian perfect even in those infamous tongue-twister passages. 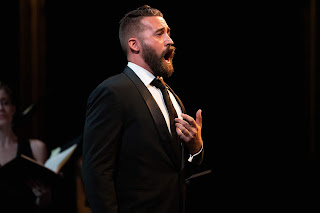 THE ORCHESTRA: Teatro Nuovo has a 60-piece orchestra that functions as a chamber ensemble. The concertmaster, sitting on the podium at the front, shares conducting responsibility with the maestro, sitting at a keyboard instrument (a late-model fortepiano, in this case) in the middle of the orchestra. The configuration of the orchestra is strange, to say the least -- the violins face each other (firsts facing the stage, seconds with their backs to the singers), the winds sit in an octet in the middle, the basses are split on either side of the ensemble. It made for an interesting sound, from the audience's perspective. The first violins and wind soloists are the center of attention in a bel canto orchestra, and they came through loud and clear. I'm not going to pretend that the modern configuration, with a real conductor serving solely as a musical interpreter and everyone facing the same way, isn't an innovation -- there's a reason the MET orchestra doesn't sit like Teatro Nuovo. But the orchestra's seating didn't seem to affect their accuracy and poise; they were fantastic in every sense of the word. I buy the configuration both as a musical and intellectual exercise. Special nod to harpist Parker Ramsay, who sat onstage to accompany two arias with very, VERY prominent parts.

Overall, an enjoyable evening. The entire concept had a novel sparkle to it, enough to offset any blandness in the acting. I was entirely satisfied -- the reproducibility factor seldom steers me wrong.
at August 05, 2019