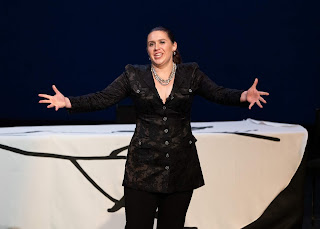 Concert #41: In Which I See a Three-And-A-Half-Hour Opera That Usually Gets Cut Down to Two Hours for a Reason

Don't get me wrong, I'm not faulting Teatro Nuovo for this. I totally understand wanting to play every note that the composer wrote.

But Rossini wrote this opera for a different audience. Back in the early 1800s, the opera was as much a place for social hour as it was a place for musical edification. The 20-minute scenes sung by the protagonist's first cousin's husband's servant were the perfect opportunity for Signore and Signora Garganelli to go over and play cards with their aristocratic friends.

But it's the 21st century. Friends are obsolete. Our phones are the new "friends."

Okay, maybe that's kind of a dystopian read on things. But Wagner invented this idea that music should be all-consuming and everyone should be quiet and do nothing but listen. And now we just sit and listen and roll our eyes at people who cough (don't lie, I do it too -- concert halls literally provide free cough drops, but you can't be bothered to pick a few up before the performance?).

Anyway, this is all a long-winded way of saying that I understand why The Met cuts Gazza ladra to two hours. But I'm glad I got to see the whole thing -- again with that reproducibility factor!

You've definitely at least heard the overture to La gazza ladra ("The Thieving Magpie"). It's a favorite among film producers, most notably used in A Clockwork Orange. Couldn't tell you where in the movie -- I don't do psycho-crime movies.

ANYWAY, now that my anti-establishment cynicism is out of the way, I really really enjoyed Teatro Nuovo's performance. The orchestra sounded as great as ever, and I think they saved their real A-cast for this performance. The acting was more acute, though that could possibly be because the staging was slightly more...well, staged. There was a long table in the middle of the stage that at least gave the performers something to work with.

The many faces of Hans Tashjian (PC: Steven Pisano)

The highlight of the performance was mezzo Hannah Ludwig as Pippo, the cheeky trouser-role servant who eventually exonerates the protagonist from her execution (have I mentioned that Italian tragedies are indistinguishable from Italian comedies until the last ten minutes?). Not only did she sing beautifully, but she sparkled in the role, becoming at once naive and all-knowing. Bass Erik van Heyningen's constantly-concerned portrayal of the defected soldier Fernando Villabella was convincing, coupled with a sweet and powerful bass. Hans Tashjian, the main villain, brought an intentional apathy to his character, reinforcing his nuanced vocal technique with an impressive repertoire of cunning smirks, each distinct from the last. And of course, I'd be remiss if I didn't mention the beautifully poignant singing of the protagonist herself, Alisa Jordheim as the condemned (then not) Ninetta.

Oh, and then there was the uncredited chorus member who played the magpie. Firstly, the feather-boa-plus-tuxedo look is a keeper. He managed to be the funniest character, even though he only sang two lines -- the way he raced around the stage was wildly reminiscent of the Road Runner.

And the orchestra, as usual, sounded great; a few of them even joined in on some of the buffo fun, the principal flautist and oboist each in their own little solo world until the oboist "realized" that everyone was concentrating on the flute player's thirty-second notes instead of her quarter notes.

So yes, I sat through three and a half hours of opera on this one Thursday night. But I don't have a single regret. I've said it once, and I'll say it again: reproducibility factor never steers me wrong!
at August 07, 2019