The wire-rimmed glasses and sweater really make Vijay look like he
teaches at Harvard....oh wait, what's that? He does teach at Harvard?

My 17-year-old brother made an impromptu trip to NYC for a weekend with two very, very clear conditions. The first was that we go on a pizza crawl through lower Manhattan. The second was that I had to take him to the Village Vanguard. But not necessarily in that order.

So I plucked him off his MegaBus (which was an hour late, but frankly who's surprised?) and we moseyed (ran?) on down to The Vanguard. He didn't care what was playing. I, of course, did.

My brother's listening habits are eclectic. He's a bassist, both jazz and classical; on any given day, he'll jump from Kanye to Brahms's German Requiem and back to Vince Staples or Brockhampton. Right now, he's sitting in the corner of my apartment singing both parts to "Maria" from West Side Story in (more or less) the correct octave.

He's got a few albums he goes back to time and time again. Dietrich Fischer-Dieskau singing Winterreise. The Beach Boys's Pet Sounds. Kendrick Lamar's To Pimp a Butterfly. But the one he goes back to most often is of drug-addled pianist-composer-genius Bill Evans sitting at The Vanguard's Yamaha alongside his trio.


"Alice in Wonderland" is his favorite

We went down the stairs. He smelled the Vanguard smell. We sat down below one of those framed records. And he turned to me and said with a shit-eating grin, "You know who sat there? Bill Evans. Bill Evans sat there.

"Now, who are we seeing tonight?"

So I explain. Vijay Iyer. Music cognition PhD candidate turned jazz (and occasionally classical) composer. With his sextet, whose alto saxist is also a PhD-level composer, and whose drummer got picked up straight out of college (he's like 24 now -- feel inadequate yet?).

"But is he as good as Bill Evans?"

What the hell am I supposed to say to that? Like, less heroin? Except even when you strip the drugs out of Bill Evans's charts, they're still totally different from Vijay Iyer's? Because they're both geniuses?

I decided on the most concise way to say just that: "Shut up and listen."

And so he did.

The quartet did the same thing that the Uri Caine Trio did back in concert #2 -- they basically played for an hour straight, blurring the transitions between charts so you didn't realize you were in a different realm until you were already there. I often found myself bopping my head to the beat, except that Vijay Iyer's style is marked by sudden slight changes in beat pattern, so I'd end up on the offbeats or something ridiculous like that.

I don't know what any of the charts are called (the Sextet was *too cool* to announce) but I can tell you that they were all amazing. The upbeat songs let the rhythm section show off their technical prowess -- Stephan Crump's bass playing and mouth movements were each something to behold, and Jeremy Dutton imparted the most expression one can into an unpitched instrument. The downbeat songs let the horn players show off their ability to fill the the spaces above the sparse, but aurally complex chord structure. And regardless, Vijay Iyer was there with his exquisitely-voiced comping and wildly virtuosic solos.

And speaking of space and solos, the most fascinating thing was how the soloists used empty space. Steve Lehman's alto solos tried to fit the most notes into the smallest space: exhausting, but impressive. Graham Haynes used an echo/looping effect on his cornet solos, basically playing a few notes and waiting for the loop to fade before playing a few more: intellectual, but minimal. Mark Shim trod the line, his solos gaining momentum like a loose car down a steep hill before hitting a brick wall of silence.


Of course, it wouldn't be a Vijay Iyer concert without the obligatory politically-charged rant that he improvises over the final chords of his set. The theme is always the same: the struggle is Far From Over (coincidentally, the name of the Sextet's most recent album). According to my friend, Iyer actually mentioned Trump by name in his Tuesday set, essentially echoing the message that YG & Nipsey Hussle so eloquently purvey in the popular song linked below. This particular evening, there was an elderly couple in the front row that particularly jived with what Vijay had to say. #woke

My brother and I both left the Vanguard happy into one of the hottest nights of the summer; we made the wise, wise decision to traipse around the Village and the Lower East Side in pursuit of pizza. Two slices and a whole pie later, we patted our sweaty bellies. It had been a good night. 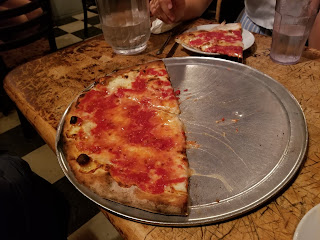 John's of Bleecker Street, the favorite pie of the night