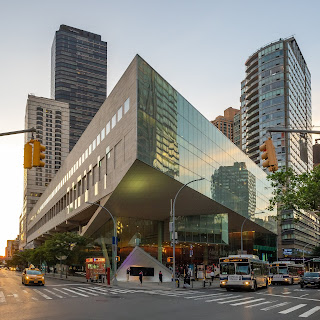 God, why is the music world so small?

I think I jinxed it by mentioning that I didn't see anyone I knew at the Dover Quartet the other day. But every concert since then, I've randomly run into at least one person I know.

As soon as I'm through Alice Tully security check, I run into a music camp friend. Then another. Then I sit down, and I find out that no fewer than five close music camp friends are in the Juilliard Orchestra for this concert.

Anyway, my last two reviews have been really, really long, so I'm going to try to keep this one relatively short. I saw the Juilliard Orchestra last year with phenom conductor Barbara Hannigan (who was giving a recital across town at the Park Avenue Armory -- sold out to the rafters, naturally), and they sounded tremendous. The centerpiece of that program was also Bartók (his suite from The Miraculous Mandarin), so I figured, why not?

From my sample size of two (2) concerts, I've come to a conclusion about the Juilliard Orchestra: they'll never be bad. It's an orchestra comprised of the best young musicians around. The intention, the musicality, that will always be there.

But sometimes, Juilliard students have busy weeks. That's what this concert sounded like: an orchestra of phenomenal musicians, each of whom had fifteen million other things on their minds this week.

Consequently, the Thorvaldsdottir was probably the best-played thing on the program, and my favorite. Metacosmos sort of smears time in a way, blurring the lines between beats such that precision is not so important as transparent, visceral emotion. That's kind of a given for most of the musicians at Juilliard -- another day at the office.

But the orchestra began to fall apart behind Jaewon Wee's Prokofiev. Some of the orchestra knew the parts, but there was a critical mass of musicians who failed to look at the conductor's beat, resulting in a slow, but steady phasing effect between strings, winds, and brass. Luckily, Wee put up a well-polished performance that all but covered the missteps of the orchestra. I didn't necessarily feel like I was in the palm of her hand, but hey, we can probably blame that on the orchestra.

The Bartók was vigorous, if a little sloppy. The couples in the giuoco delle coppie ("game of the couples" were coordinated and well-rehearsed; the trumpets and trombones deserve a special mention for the chorale at the midpoint of that movement. The principals were all so very well-prepared, every solo sending my jaw straight to the floor. But once again, that phasing effect was persistent and ever-present. Maybe that burden falls on the conductor -- Milarsky's conducting seemed serviceable, though not particularly clear.

So, in conclusion, the Juilliard Orchestra is always worth seeing, even when they're not at their finest. When they bring in big name conductors, the quality is usually better (a friend was telling me about a few weeks ago, when Karina Canellakis conducted Ein Heldenleben -- best concert he'd ever been to). But when it's a staff conductor, just be warned: a bunch of great musicians do not an orchestra make.

For the love of god, Juilliard Orchestra, treat yourselves to a glass of wine, some Real Housewives, and a nap before your next concert. You all deserve it.
at October 19, 2019