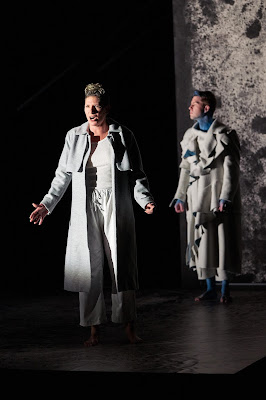 I've been on the board of Yale's undergrad opera company for a couple years now, and I really truly love it. But when programming season comes around, we often hit trouble. There are only so many operas that are a) small enough that they can fit into one of the tiny theaters set aside for student use and b) fit our personnel (see: The Great Tenor Drought of 2017).

So we often end up with operas in one of three categories:

And I love all that we do. But the thing is...sometimes, it feels like composers always assume that every opera company in existence has infinite money and resources. And increasingly, that is not the case. There's a space in the market for new operas which are compact, minimal, and relevant. 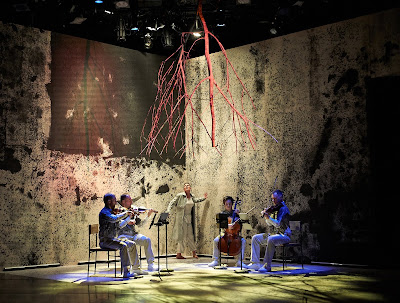 Luckily, Columbia has identified that void in the repertoire, and is filling it steadily, year by year, with their Chamber Opera Commissioning Initiative. Established in 2017, Desire is their second project; their first show, Missy Mazzoli's Proving Up, met great critical success when it premiered last year. But Columbia has had a long history with chamber opera, premiering works of Britten and Virgil Thomson in the 1940's; more recently, they staged U.S. premieres of works by Olga Neuwirth and Iannis Xenakis.

Unlike much of the modern opera I've seen last year (sorry to @ you again, Chunky, but it was bound to happen sooner or later), Desire didn't feel like it had an overwhelming number of moving parts. The plot was straightforward, if cryptic; the movement onstage was slow and deliberate; it felt weirdly comfortable in the best of all possible ways. This opera seemed to strive towards profundity rather than outright experimentalism, a goal which it met with flying colors.

All of the motion that was taken out of the staging was siphoned into the complex string-quartet score. There was never a moment when Hannah Lash left the room unfilled, whether by scuttling exchanges, insane leaping figures (yes, I saw that time when the cellist had to leap a full foot and a half up his fingerboard), or lilting nods to the passion-waltzes of high romantic opera.

In isolation, the pacing of the libretto (written by the composer) remained largely the same throughout -- the sentence length, structure, and syntax barely varied throughout. But Lash's plain words were brought to life by the virtuosic vocal lines; the composer altered the rhythmic elements of the music to impart a broad emotional palette into the text. In a way, it was reverse text painting: the music seemed to determine the meaning of the text, rather than vice versa.

The three-person cast was headed by contralto Kirsten Sollek as a woman who existed in two worlds: a dark gray bedroom and a shimmering mystery-garden. Though contraltos are rarely main characters, here it seemed right, her rich, chesty mid-range nestling squarely between the shrill countertenor of the garden inhabitant (designated in the program as a man, but his costume suggesting, in the wise words of my date, "more of an origami Transformer") and the concerned baritone of the woman's husband. 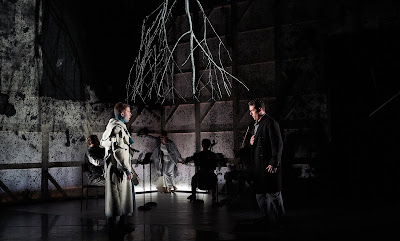 Daniel Moody's voice was exactly what I wanted out of a new-music countertenor, bright and full of forward-propelling vibrato. Christopher Dylan Herbert (see my review of him from this summer) filled his sweet voice with a surging sense of bewilderment and discomfort. And the seemingly-superhuman JACK Quartet....I simply don't think there are words. The amount of collective brainpower, acuity, and passion they bring to these treacherous new scores never fails to amaze. And yet, through the complex ebbs and flows of the music, they always maintain the most incredible sense of calm, as if they are incapable of making a mistake.

This production was genius. I can only hope it comes back around during my lifetime. Any regional new music ensemble would (or at least should) jump at the chance to stage this show -- I know I'd make the trek to see it again.
at October 19, 2019