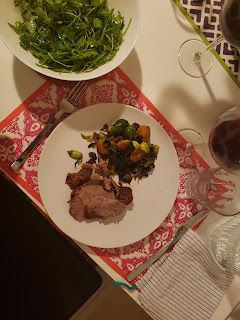 One thing I have not made clear enough in my reviews: I am a foodie. The only thing that rivals my love for a good, cheap concert is a good, cheap meal. Not shockingly, it's much easier to find the former around NYC -- I'm pretty sure if I waltzed into Katz's Deli and asked for the "student discount" I'd get a laugh and lashing (then again, it's hard to do anything at Katz's without getting made fun of, that's kind of their brand).

Now that I live in an apartment, I've finally been able to get back into cooking regularly. I've had some interesting experiments in my tiny one-person kitchenette. A moderately successful crispy pork belly. Beef rendang with a paste I bought at a hole-in-the-wall Indonesian market in Forest Hills -- the paste had so much chili that it kinda gassed out my apartment even with all the windows open. A five-ingredient butter-soy-garlic braised enoki mushroom dish that I now swear by.

My friend Amanda is my cooking buddy. We grocery shop together, we exchange recipes, sometimes we even eat together. A couple months ago, Amanda texted me a picture from a ratty spiral-bound cookbook and said, "Project?"

The recipe was from Amanda's old copy of the Chicago Symphony Orchestra Cookbook (out of print, but available on Amazon) from the time when her father played trumpet with the CSO. A compilation of exceedingly 1970s-esque recipes, the book includes favorites from musicians, conductors, spouses, and composers.


Our project: American composer Virgil Thomson's (1896-1989) recipe for roast leg of lamb. Thomson's musical oeuvre has largely been forgotten; he's remembered most fondly as a father figure for composers of the next generation, most notably Leonard Bernstein and Ned Rorem which, according to academics, was "a circle united as much by their shared homosexuality as by their similar compositional sensibilities." His most famous works include three operas (two with libretti by Gertrude Stein, one of which the NY Phil is doing later this year) and a handful of Ken Burns-style PBS film scores.

His lamb recipe looked edible. Huge leg of lamb. Cut all the fat off. Rub with crushed garlic and rosemary (no salt, he's very clear about that). 550°F oven. 8.5 minutes per pound. Easy enough, I suppose.

So Amanda and I check our GCals and penciled in a date around finals -- what better way to celebrate the holidays (and procrastinate on my final papers) than with a huge hunk of Roast Beast™? (please don't sue me Dr. Seuss Trust please please please)

So I showed up to Amanda's house around 6:45 on a Monday night. We poured ourselves glasses of wine (I had written most of a 12-page paper that day, I damn well deserved it) and set to work trimming the six-pound leg of lamb of all of its fat. Yes, all of it, or else Virgil Thomson assured us we'd set our oven on fire. Nice.

I suppose I should say now that we committed ourselves to following Virgil's recipe exactly, so help us god. This is important, because we made some steps that we knew would produce wonky results. But we did it for science!

We crushed some rosemary and garlic and rubbed it on. Just like we were supposed to. And then we stuck it in the oven. And, predictably, the garlic and rosemary torched almost immediately and set off the smoke alarm for the first time that night. We dismantled the smoke detector after that, but that was far from the last time the smoke alarm should have gone off.


smoke alarm: BEEP
me: *goes to fan smoke alarm*
Amanda: "Do you want me to take a video of this for your blog?"
Me: "I mean....I guess so?"
Virgil Thomson's Four Saints in Three Acts: *playing in the background, if you listen closely*

The original plan was to make an entire Chicago Symphony dinner, but we looked through the book and decided that everything looked too....well, too 1970s. Lay off the gelatin, guys.

After smoking out the apartment three times (though admittedly those last two were thanks to our complete and utter incompetence at making Yorkshire pudding), we pulled the lamb out of the oven. It looked nice enough. We carved it according to Virgil's instructions (ALWAYS perpendicular to the bone -- he was very particular) and sat down to eat. We ended up with:


Overall not too bad. But Amanda and I looked at each other after enduring three smoke-outs and more than our fair share of other hilarity and basically said, "We are obviously better cooks than Virgil Thomson. Let's just use our own recipe next time."