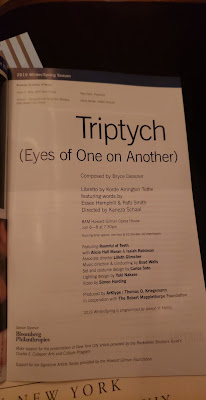 WHO: Roomful of Teeth and friends
WHAT: Triptych (Eyes of One on Another) by Bryce Dessner
WHERE: Peter Jay Sharp Theater, Brooklyn Academy of Music
WHEN: June 8, 2019 at 7:30pm

"In america,
I place my ring
on your c*ck
where it belongs"
-- Essex Hemphill, from American Wedding

Like, how am I supposed to react to that? Especially when that phrase repeats for ten minutes straight?

When I realized that Dessner's Triptych was a "new way" of looking at the photographs of Robert Mapplethorpe, I knew I was in for some graphic material. But oddly enough, it didn't bother me. The graphic nature was attenuated by the music that accompanied -- the experience altogether read less as glorification of sexuality and more as an earnest snapshot of the life of another.

Roomful of Teeth occupies a singular niche in the music world: they are the crossover of all types of music. A bold statement, I know, but if you listen closely they really do have a twinge of just about any style you can think of. In this performance alone, they were all over the map: early music (side bar: how amazing would it be if Roomful of Teeth did Monteverdi????), gospel, rock and roll, contemporary classical, spoken word, you name it. 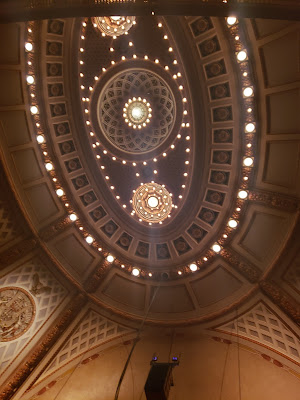 Does someone want to explain to me why Brooklyn has all the best
concert venues? Look at those chandeliers!

And because Roomful of Teeth is a group of young people at the top of their field, they collaborate with a bunch of other young people at the top of their fields. Accompanying Roomful's always impeccable singing were a chamber orchestra conducted by Roomful founder and music director Brad Wells and beautiful lights, set, and video by leading designers in the avant-garde theater world.

A couple of auxiliary vocal soloists joined Roomful of Teeth for this performance. Mezzo-soprano Alicia Hall Moran walked the line between opera and gospel perfectly, her singing passionate and soulful. But the tenor soloist, Isaiah Robinson, takes the cake for this performance. "Tenor" doesn't even begin to describe what he is. I think he's gospel trained, but imagine if you took your average gospel tenor and then eliminated any trace of shouting in the higher registers. He was reaching D's, E's, even an F and a G at one point without any trouble or effort -- I know sopranos who can't do that.

This is one of those pieces that I would advise against listening to if it's ever recorded -- the piece is nothing without the full experience. Without the accompanying video, the stark choreography (complete with iPad-music stands on wheels), the sometimes-blinding lighting design, you would lose much of the effect. I think they're continuing to tour the piece for the next couple months -- catch it if you can!
at June 15, 2019